Keyboard warriors, clicktivism and overvaluing our own opinions 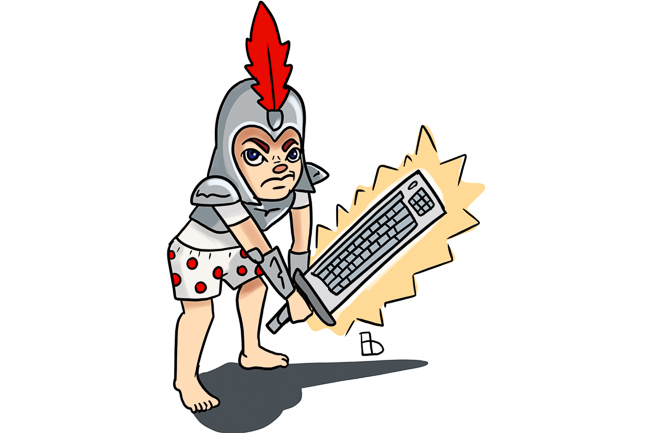 Q: A friend is in an online relationship with a person in Europe. This friend has been lonely for years and was taken advantage of in the past. Now they plan to sell everything , move and get married.

My friend tunes out detractors, so I took to Facebook, covertly peppering his feed with posts, memes and articles about online hoaxes and foreign strangers. Hopefully, he’ll get the subliminal messages, because nothing else is working.

What else I can do to stop this train wreck?

The straight owner of a pizza place recently tweeted a video calling his gay male friend “girl” and making a “limp-wristed” gesture. We put the owner on social media blast, tagging him in comments and posting on his business page.

For days, it was nerve-racking, and kind of exciting if I’m honest, to jump on and see the latest comments. The guy finally posted an apology, saying that he regrets it, but it rings hollow. He even wrangled his gay friend to appear in his response, and they actually defended him!

The public posts are dwindling now, and it seems like the Twitterverse is moving on. I think it’s disgusting to let slights like this just vanish.

There was a time when people’s decisions were made before a limited audience. Opinions were personal as well, and it was considered rude to offer our own without being asked. If shared at all, it was only with those closest to us.

Welcome to social media. Have a look around and make yourself comfortable.

We’re accutely aware of people’s personal decisions, and our approval or disapproval is almost expected. But it’s The Big Facebook Lie that our opinions of other people matter this much.

Is a friend making a mistake in love? Worse than the potential heartache for the friend could be not giving it a chance and never knowing. You don’t know. Speak to them respectfully instead of posting passive-aggressively, then butt out.

Too many of us are so convinced that our random thoughts are important to others, we are more likely to dig in our heels during conflict than open our hearts. We’d rather defend our opinion than listen to information that might change our minds. Vengeance is quick and forgiveness is slow.

Basing decisions on what other people think is the road to ruin, and forcing your opinions on others is ugly, isolating and potentially dangerous.

Cancel Culture and pile-on shaming leaves no room for evolution on difficult topics. Clicktivism makes us feel like we helped people, but we didn’t actually do anything other than mash our thumbs on the inanimate and soul-free lightbox in our pocket.

We can be like a pack of hungry wolves perched on our sofas and ready to pounce on snubs. Then we tap out our anger and ennui at convenient villains. What if we tried to create communication paths for them to become allies? What if we invited or welcomed invitations to offline conversations rather than public sparring of words online?

You know the old adage, “Opinions are like assholes — everybody has one.” Here’s an expansion on the comparison: Like assholes, precious few if any people want to see yours, much less have you rub it in their face claiming it’s the best meal on Earth. Let’s pull up our pants and remove our own private parts from the public asshole parade.

Q Advice is intended for entertainment, not counseling. Send your burning Qs to [email protected].

Pick it up each week at LGBTQ and allied venues in Atlanta, and find fresh content every day right here.