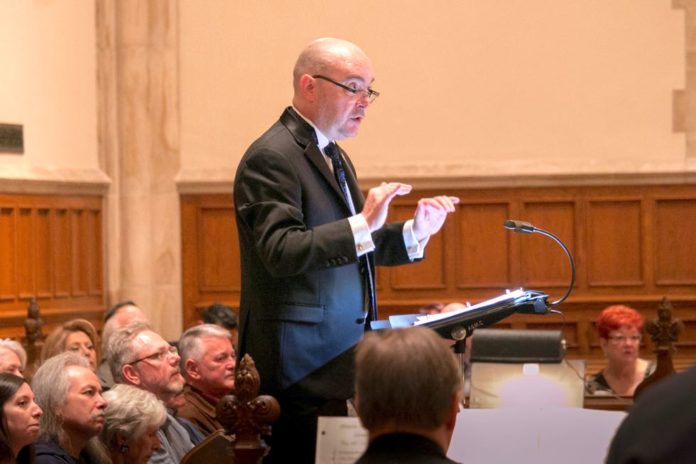 Kevin Robison won’t really call it retirement. But the longtime artistic director of the Atlanta Gay Men’s Chorus is stepping down, bringing his 10-year tenure at the chorus to an end after its popular holiday concert this weekend.

“That’s the word I’m using. I’m not retiring I wish I were old enough to actually retire,” Robison said on a new episode of Podcast Q. “I’m stepping away to pursue some other things that I’ve had on the back burner for a while.”

So when the last note is sung at “Bells, Babs & Beyond” on Saturday, Robinson steps down from the chorus. It’s a bittersweet moment to be sure. And he’s bracing for some tears.

“It is going to be bittersweet. It’s going to be emotional. The men and I are very emotional about it. We’re already having tearful moments in rehearsal and I’m encouraging them to do that so the more we do that in rehearsal, the less likely we are to fall apart in performance,” he said.

Listen to the podcast below or on iTunes, Google Play and Stitcher.

On the new episode, Robison also discussed the holiday show that he co-wrote. It’s an annual event that has taken place each holiday season during the 37-year history of the chorus. But this one – Robison’s finale – is a program built around three numbers that Barbara Streisand made popular on her holiday albums. It’s also a play on Robison’s first holiday concert as artistic director – “Bells, Brass & Beyond.”

“It’s going to be a lovely, lovely program. There’s some audience participation so I’ll just warn everybody. But we’re bringing back some favorites that people have commented on over the years. And it’s going to be, I think, a lovely reflection of the last 10 years of holiday programming that we’ve done,” Robison said.

Robison will take a months-long breather from the chorus before looking for a new job that combines his love of theater, music and teaching. Before he started with the Gay Men’s Chorus of Los Angeles and later, the chorus in Atlanta, Robinson worked in theater, taught singing for actors and directed music for productions at the Pacific Conservatory of the Performing Arts in Santa Maria, Calif.

“I’ve really missed theater and I’ve missed teaching and I’m hoping to get back to teaching musical theatre. I have dual passions here. And I’ve missed the teaching element a lot and that’s I think where my heart is and I’m looking at potential opportunities for those kinds of jobs,” Robison said.

For Robison, the time felt right to leave his role at the chorus.

“I’m taking a risk. I have always heard these stories of people who walk away from jobs that they love before they get to a point where they don’t love them any more. And I think that’s really wise. It’s sort of like a sitcom that goes on for a couple of seasons longer than it should have. I don’t want to be that sitcom,” he said.

But before the challenge of a new job, Robison wants to focus on married life. He’ll be combining households with his husband at their home in Doraville. His husband, a professor at the University of Georgia, lives in Athens. For years, the two have discussed who would retire first and when they would combine their households.

“It occurred to me one day, you know we’re not getting any younger. What if we do this sooner than later. And I’m the one who’s able to step away from my job. And let’s finally be a married couple and move in together and be a little more normal,” Robison said on Podcast Q.

“Bells, Babs & Beyond: The 37th Annual Holiday Concert” is Dec. 8-9 at the Cathedral of St. Philip. Tickets.