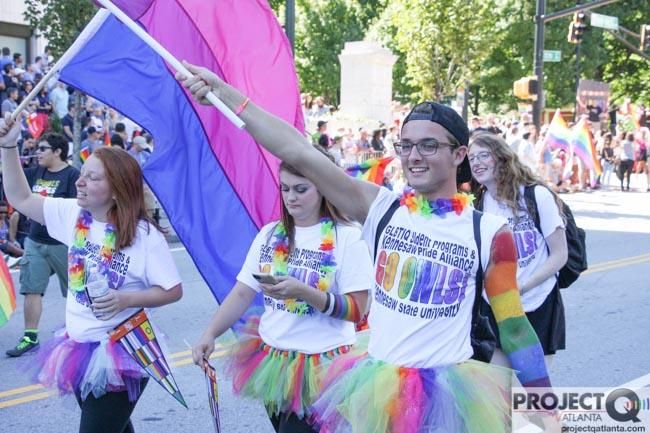 Kennesaw State University pulled its logo from two LGBTQ pamphlets and then removed the documents from a website and campuses in Kennesaw and Marietta.

The pamphlets – one about gender-neutral pronouns and another detailing the locations of single-stall and gender-neutral restrooms – were altered and then removed from KSU'sLGBTQ Resource Center’s website and campus after pressure from a retiring anti-LGBTQ lawmaker.

The moves were uncovered by the school’s American Studies Student Organization (AMSTO) and first reported by campus newspaper the Sentinel.

The AMSTO posted a statement about the removals on its Facebook page and in a Google Doc. The group called for the school to reverse its decision and made a plea to KSU’s president, Dr. Pamela Whitten.

“We believe that these resources should be made available online once again, and that Dr. Pamela Whitten and her administration need to come out in support of LGBTQ students broadly, and transgender students specifically,” they wrote.

“Dr. Whitten and her administration need to see vocal support from the campus community for LGBTQ and transgender students,” they added.

KSU responded to the Sentinel’s request for comment without mentioning LGBTQ students, faculty or staff or addressing the pamphlets, according to the Sentinel.

“We deeply value the broad range of experiences and perspectives our students bring to KSU, and remain steadfast in our commitment to promote a supportive and inclusive environment where all students can be successful,” said K.C. White, KSU’s vice president for student affairs.

The AMSTO said that the school removed the logos and the pamphlets earlier this spring.

In May, Georgia House Republicans questioned the funding of the LGBTQ center and mocked gender-neutral pronouns as “fantasy language” in a House subcommittee hearing.The hearing was sparkedby two lawsuitsfiled by the anti-LGBTQ group Alliance Defending Freedom alleging that conservative student groups have been treated unfairly.

Rep. Earl Ehrhart – one of the most outspoken anti-LGBTQ lawmakers in Georgia – questioned then-interim KSU President Ken Harmon and other school officials about the treatment of conservative students, their campus affinity organizations and the nearly $138,000 annual budget for the LGBTQ Resource Center.

“It is kind of Orwellian in my mind,” Ehrhart said during the hearing at the State Capitol. “You have some groups that are more equal than others.”

Ehrhart directly referenced the LGBTQ pamphlet with the gender-neutral pronouns.

“This particular pronoun chart has the Kennesaw brand on it. That is a branded university sponsored – I don't know if was state funds that were used to print it. It is a university-sponsored pronoun. But you are telling us that the university is not adopting this set of fantasy language,” Ehrhart said.

Harmon said that a staff member created the document and posted it to the LGBTQ center’s website.

“Let me be clear. I don't care if people want to develop their own fantasy language. And if they pay for it, they come up with it, you can conjugate 75 other pronouns and pass them out on campus if you create it and you did it,” Ehrhart responded. “But the university sponsorship of it is problematic. There may be people who don't find these pronouns appropriate or they may be concerned about those.”

Ehrhart, the longest-serving Republican in the Georgia House, is retiring after 30 years in the legislature. His wife, Ginny Ehrhart, won the Republican primary for his Cobb County seat and faces Democrat Jen Slipakoff, who has volunteered with LGBTQ organizations and has a transgender daughter. The election is Nov. 6.