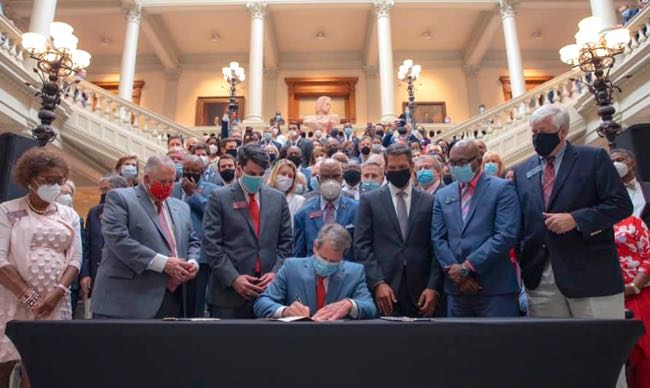 Gov. Brian Kemp signed a hate crimes bill into law on Friday, ending a 16-year drought that had left Georgia as one of only four states in the country without such a measure.

The historic measure – which lawmakers passed on Tuesday after 15 months of wrangling over it – also marks the first time in Georgia history that the state has extended protections to LGBTQ people.

Kemp said the Feb. 23 killing of Ahmaud Arbery near Brunswick pushed lawmakers to take action on the bill.

“We witnessed a horrific hate-filled act of violence. We saw injustice with our own eyes. Georgians protested and demanded action, and state lawmakers rose to the occasion,” Kemp said.

“Today we stand together as Republicans and Democrats, black and white, male and female, from rural, urban and suburban communities, to affirm a simple but powerful motto: Georgia is a state too great to hate,” he added.

During a bill signing ceremony at the State Capitol (watch below), Kemp was flanked by Lt. Gov. Geoff Duncan, House Speaker David Ralston and state Rep. Chuck Efstration, the Dacula Republican who sponsored the legislation.

Efstration said the legislation – House Bill 426 – closed a gap in state law that had been left open since the Georgia Supreme Court struck down the state’s hate crimes law in 2004.

“Offenses that are based upon bigotry, racism and hate can be called that under the law and punishments can be given appropriately,” he said. “Reaching passage of this bill was not an easy task. It took two years and the bipartisan support of far too many individuals to name.”

Duncan credited the bill’s bipartisan support for helping it move from being stuck in the Senate Judiciary Committee to final passage by lawmakers in six days – all in the closing days of a legislative session put on hold for months during the coronavirus pandemic.

“Passing a bipartisan compromise on H.B. 426 is definitely the proudest moment I have in elected office,” Duncan said.

Ralston, who helped push the original bill to House approval in March 2019, invoked Martin Luther King, Jr. and the statue of the civil rights icon that was unveiled at the State Capitol in 2017.

“That statue will stand watch as we strive for the righteousness that each and every citizen deserves, no matter their race, religion, gender or sexual orientation,” Ralston said. “On this historic day, we inch forward along the arch of the moral universe, which Dr. King recognized was long but bends towards justice – justice that is needed when it comes to horrific moments like the barbaric slaying of Ahmaud Arbery.”

Ralston also credited the large coalition of supporters of the legislation, which started calling for the bill’s passage in January and grew louder after Arbery’s killing.

“This is a defining moment in Georgia’s history as Gov. Kemp signs into law Georgia’s new anti-hate crimes law, House Bill 426. Arriving at this moment was a team effort, and I want to thank all those business leaders, former elected officials and community groups that joined us on this journey,” Ralston said.

Photo courtesy Office of the Governor