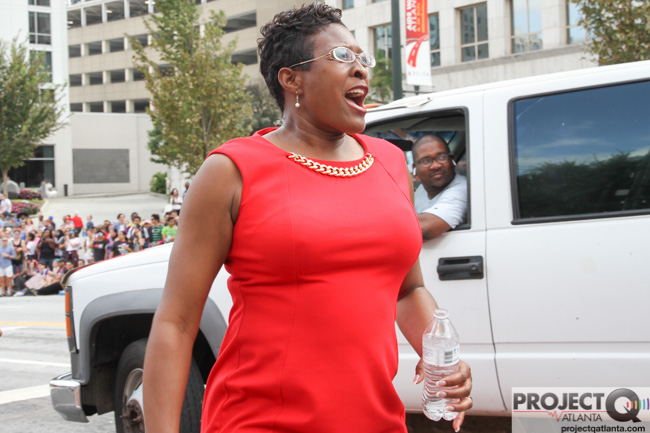 Keisha Waites said resigning her seat as a state lawmaker was “bittersweet,” but after five years in the General Assembly she was ready to take that experience and run for Fulton County Commission chair.

It's her second run for the top elected position in Fulton, a race in which she faces Sandy Springs City Council member Gabriel Sterling and Robb Pitts, who has been elected to the Fulton County Commission and Atlanta City Council. The election is Tuesday.

Waites could become the first-ever openly LGBT chair of the commission and said that as a state lawmaker, she championed issues important to all Fulton residents. The candidates are running to replace John Eaves, who resigned the District 7 chair post earlier this year to run for Atlanta mayor.

The decision to resign her state House seat was difficult, she said.

“Leaving the General Assembly certainly was bittersweet. For those of you who know my story know that I did not win elected office you know right away, the first time, second time, or the third time. My story has been a journey in itself,” Waites said.

Waites took office in February 2012 after winning a special election for the District 60 post in the state House. In 2010, she ran for the Fulton County Commission, topping a crowded field only to lose the runoff by 168 votes to Joan Garner, who went on to become the commission's first openly LGBT member. In 2006, Waites ran for Fulton chair and lost to Eaves.

In the commission chair race, Waites has been endorsed by LGBT groups Georgia Equality and Georgia Stonewall Democrats.

Waites said she viewed Eaves' resignation as an opportunity for her to do greater work.

“This was an opportunity to do greater service and greater work. And I believe that John stepping down, given that I had ran for this seat, was a signal to me that it was time to move on and do greater work in the county that I grew up in and the city that I love,” Waites said.

Waites said she wants to unite Fulton, a county that has traditionally been politically divided.

“The chairman has to represent all of Fulton County. And I think that you see people operate in these silos, over the years, you’ve had North Fulton, then you’ve had South Fulton, and then you have Atlanta somewhere in the middle,” she said.

As chair, Waites would play a role in county efforts combat HIV through the Fulton County Task Force on HIV/AIDS. The panel has an ambitious plan to fight the disease, which has a personal connection to Waites.

“I certainly look forward to filling in the gaps from where [the late Commissioner Joan Garner] as well as Chairman Eaves left off. Chairman Eaves was very supportive of the task force,” she added.

Waites said that LGBT voters will play a pivotal role in the chair’s race.

“I believe the LGBT community will play a very strong and pivotal role in this election. And it is my hope that they will be the deciding factor in the chairman’s race,” she said.

“The support of my peers in the LGBT community is very, very special to me,” Waites added. “To have them behind me in this race means the world to me.”