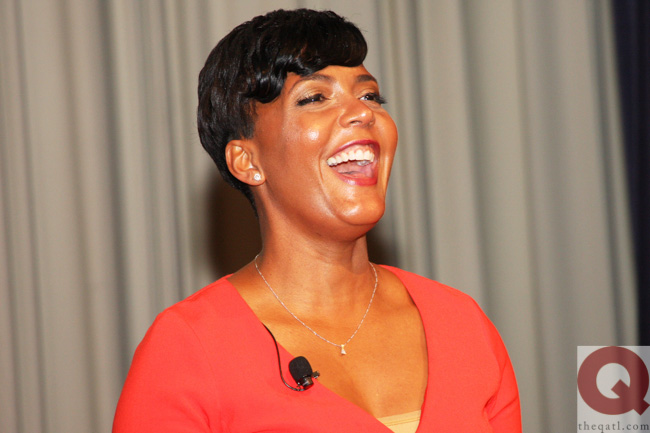 Keisha Lance Bottoms won the Atlanta mayor's race on Tuesday by a slim 759-vote margin over Mary Norwood in a runoff campaign that split LGBT voters.

“This is about Atlanta,” Bottoms said, according to the AJC. “And what we said from Day One is that this is about what we hope this city can be for our children’s children.”

Norwood said there are more votes to count – including absentee military ballots – and that she would ask for a recount.

“We can’t call this yet,” Norwood said, according to the AJC.

Bottoms was the top vote getter in the Nov. 7 election, topping Norwood and a crowded field of 12 candidates. But in the closing days of the runoff, a poll gave Norwood a slight lead and on Monday, Norwood named a transition team to help her take office.

DuBose Porter, chair of the Democratic Party of Georgia, called the win by Bottoms “a truly momentous victory.”

“Keisha unabashedly spoke out against bigotry, sexism and discrimination,” Porter said. “She stood tall and never flinched under fire. Keisha fought for her city and all of its people with love, determination, a spirit of equity and an offer of justice. This is the kind of leadership Democrats believe in.”

The election split LGBT voters among two candidates who said they would focus on equality issues and HIV once they were elected as mayor. Norwood was endorsed by Georgia Equality and Cathy Woolard in the runoff. Woolard, the state's first openly LGBT elected official, placed third in the mayor's race. Both candidates made appearances at LGBT nightspots to stump for votes during the runoff.

Late last month, Woolard hosted a forum with Bottoms and Norwood in which both candidates pledged to address homelessness among LGBT youth and soaring HIV rates in the city.

“People look at Atlanta as a place that should be a safe haven and just in the same way we’ve tried to work to make sure that we have supportive housing for our veterans, and that we work to try and achieve zero as it relates to our veterans on the streets, we have to make sure that we are doing it the same way with our LGBTQ youth. I don’t think that we have enough supportive housing available,” Bottoms said.

On a recent episode of Podcast Q, Bottoms said she would advocate for LGBT issues from the mayor's office. Her commitment to LGBT equality is drawn from experiences with LGBT family members, the city's diverse population and even her mother's gay dance partner in the 1970s, she explained.

“Atlanta has always led the way in terms of us being an inclusive city,” Bottoms said.

“And we really have led the way for the nation and the world. Obviously you can go back to the 1960s and the work that was done in this city on behalf of the Civil Rights Movement. As you talk about issues that are that are facing the community as it relates to equality in general, Atlanta still has a responsibility to lead the way and we can not be a major city and a major player in this world and sit back and watch any one group be discriminated against, especially because of sexual orientation,” she added.

In an August forum, Bottoms said she would appoint a public health director so the city can take a more active role in public health issues, including HIV.