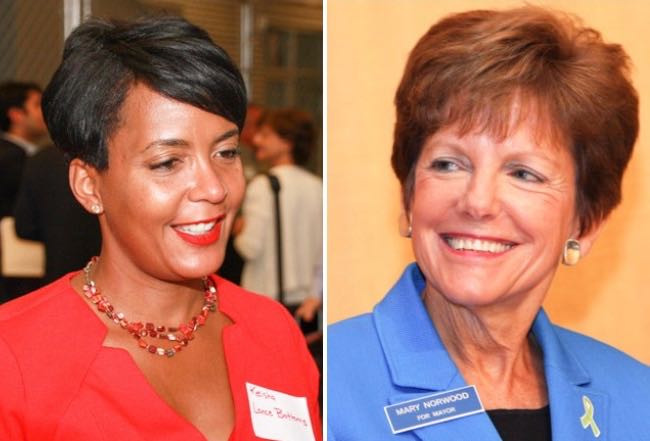 Keisha Lance Bottoms and Mary Norwood – two City Council members – captured the most votes on Tuesday and will face one another in a runoff for Atlanta mayor.

Bottoms put Norwood – who led the polls during much of the race – on the defensive in recent weeks and was the top vote-getter in Tuesday's crowded primary that included 12 candidates. Bottoms received 27.47% of the vote to Norwood's 21.66%.

The two will meet again in a runoff on Dec. 5.

Among the mayoral candidates, two were LGBT – Cathy Woolard and Laban King.  Woolard, the first openly LGBT person elected to office in Georgia, placed third with 14.32% of the vote. King did not receive a single vote. They were among 16 LGBT candidates in races across metro Atlanta.

In 2009, Norwood placed first in the results, ahead of Mayor Kasim Reed. But she lost the runoff by little more than 700 votes.

On a recent episode of Podcast Q, Bottoms told Project Q Atlanta that she would advocate for LGBT issues from the mayor's office. Her commitment to LGBT equality is drawn from experiences with LGBT family members, the city's diverse population and even her mother's gay dance partner in the 1970s, she explained.

“Atlanta has always led the way in terms of us being an inclusive city. And we really have led the way for the nation and the world. Obviously you can go back to the 1960s and the work that was done in this city on behalf of the Civil Rights Movement. As you talk about issues that are that are facing the community as it relates to equality in general, Atlanta still has a responsibility to lead the way and we can not be a major city and a major player in this world and sit back and watch any one group be discriminated against, especially because of sexual orientation,” Bottom said.

Over several terms on City Council and her first run for mayor eight years ago, Norwood has carved out a loyal base of LGBT supporters. It doesn't hurt that she will hug drag queens, shake hands in gay bars and attend LGBT rallies and marches.

As mayor, Norwood would continue to focus on LGBT issues, she said on a recent episode of Podcast Q.