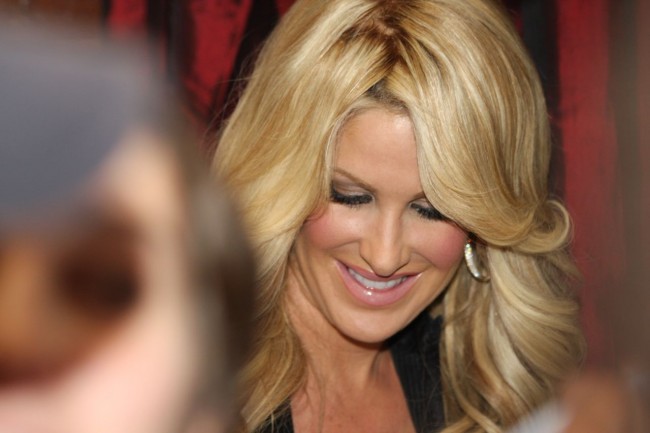 It seems that two of our favorite gay-loving television divas might love the gays a little more literally than we thought. Yup, that’s Kim Zolciak rumored to be in a lesbian love affair as Kathy Griffin plays gay for TV.

Zolciak (top photo) is proving that nurture over nature might just play a role in who turns out to be gay. Zolciak spent Friday evening at the Gold Room in Buckhead with many a gay debuting a remix of “Tardy for the Party,” that wretched song that tends to grow on you if you can make it through a few dozen listens of it. But the blond bombshell of Bravo’s “The Real Housewives of Atlanta” has also spent a couple of evenings with her gay fans at Blake’s.

And now the blogosphere is abuzz with rumors that Zolciak finds that Big Papa doesn’t have quite what she wants below the belt. Yes, it’s rumored that Zolciak has taken up U-Hauls with DJ Tracy Young, who created the “Tardy” remix for the Friday event. Zolciak Twitters about the sexuality speculation but doesn’t swat down the rumors of lesbian love.

Kim Zolciak hasn’t been in the headlines much lately, but she did manage to get an item into Us magazine, which claims she’s dating a DJ named Tracy Young (left)

Zolciak, 31, stepped out with her love of three months, DJ Tracy Young, at the Blacks’ Annual Gala in Miami Beach on Saturday.

Simon Van Kempen, part of “The Real Housewives of New York” told Us that Zolciak’s sexuality might be a storyline for the upcoming season.

I texted Kim to get her reaction. So far, she has not responded but will update if she does.

Publicity stunt? Maybe. Or maybe Zolciak has taken to heart what she’s learned at Blake’s and is about to dump Blake’s (and Big Papa) for My Sisters Room (and Young).

Our other favorite gay-loving woman on TV, Kathy Griffin, is trying her hand with acting — and locking lips with another woman. She appears Wednesday on a two-hour “Law & Order: Special Victims Unit” in which she plays a lesbian-rights activist who claims the death of a woman was the result of police neglect. (Comcast Channel 6, 9 to 11 p.m.). In the process, she plants a big wet one on the lips of the show’s regular hottie Mariska Hargitay.

Sadly, Griffin Twitters that the kiss (see video) was cut from the episode that will air. We’ll see on Wednesday.

Awwww. Dick Wolf took out my BIG KISS w the sexxxxy Mariska H from “my” ep of L&O SVU March 3rd. Is the clip really on Perez? I wanna c it.