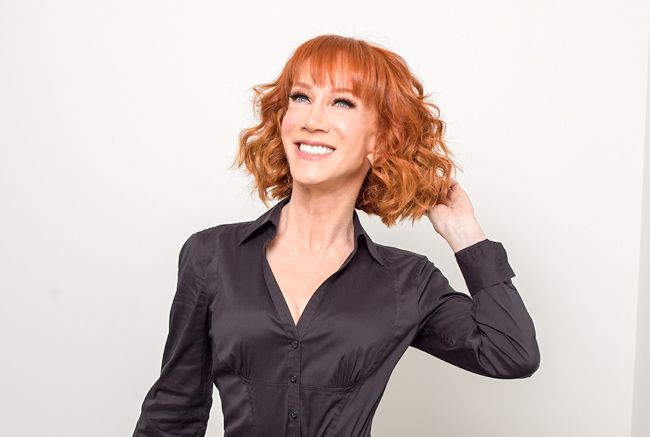 When Kathy Griffin calls from her Bel Air mansion, it takes her less than 30 seconds to bring up the incident — that incident.

“The photo that almost took me down ended up being the photo that took me around the world dammit,” she explained in a wide-ranging interview with Project Q Atlanta.

To recap, in May 2017, the comedian posted on Instagram and Twitter a video of herself holding a mask that looked like the severed, bloody head of President Donald Trump. It was from a shoot with photographer Tyler Shields, who is known for his controversial imagery.

The backlash was immediate. She became national news, and those in the entertainment industry — many of them good friends — turned on her.

Her friend and longtime CNN New Year’s Eve Live co-host Anderson Cooper tweeted that he was “appalled” and called it “clearly disgusting and completely inappropriate.”

All of the venues on her remaining tour dates canceled the shows. She retreated to her Bel Air home, not leaving for the first month or two after that. That’s where she found material for her act, courtesy of neighbors Kim Kardashian and Kanye West.

“Friends are abandoning me left and right and I just open up the window and see Kim Kardashian driving little North West around in our little gated community in a Rolls Royce golf cart that her insane mother Kris gave her,” Griffin said.

She started from there, and a new act was born, with her culling material from the entire experience. “The Laugh Your Head Off World Tour” kicked off in October 2017 and swings through Atlanta at the Cobb Energy Centre on Sept. 21.

Fans in attendance will hear all about what she called a “historic, once-in-a-lifetime story to tell.”

“I spill such a giant pot of tea that people should wear raincoats in the first few rows,” she said.

She’s not sparing anyone, least of all the adult Trump children, who she has umm … creative nicknames for.

“I’m not giving Feckless or Melania a break, not one bit,” she said. “Not to mention the older sons, Eddie Munster and Date Rape.”

Griffin dives into what it’s like to be under a federal investigation and being put on the No-Fly List.

“Being detained at every airport wasn’t fun,” she said. “That’s a diarrhea-inducing situation. So, if you’ve had too many carbs, just get yourself on the Interpol list.”

The controversy also led to some awkward moments with her family.

“The bizarreness of having to explain to my beloved 98-year-old alcoholic mother, Maggie, all the reasons why she should not believe Fox News when they said that I had joined ISIS,” she said.

The decision to, as she put it, “lean into it” and embrace the absurdity was one that happened to be a good fit for her comedy style — brutally honest about herself and others.

“So, I really made the decision to absolutely maximize the story, meaning instead of saying, ‘Well, you know, maybe I shouldn’t scare the audience with how the death threats came in or all the times the FBI had to call me saying that there was a new credible threat,’” she said. “I thought, well let’s go through some of these death threats onstage and read one.”

She credits one particularly loyal segment of her fanbase for providing material for her show.

“God love the LGBTs. The Washington Blade — the longest-running LGBT paper in D.C. — invited me to their table at the White House Correspondents’ Dinner. And that was fantastic.”

She had run-ins with numerous figures, including Cabinet members from the Trump Administration.

“I got into so many fights it was in the Washington Post,” she said.

She added that it was LGBTQ people who gave her a glimmer of hope in the wake of the controversy “when I was still just trying to put one foot in front of the other.” It came courtesy of the very same vehicle that helped her get into the mess in the first place — Twitter.

The video was of a group of drag queens dressed in blue dresses similar to the one Griffin wore during the infamous photo shoot, and they were holding bloody Trump heads.

“You could just hear five other random gays going, “Yaaaaaaas! Yaaas honey!” And I swear to God, that was the first thing that made me go, wait a minute, this thing could be turned around,” she said laughing. “There’s a handful of gay people on Fire Island who actually got the joke! Yay! Hope is alive!”

Make no mistake though, despite the sellouts on tour, the fallout continues. She said no publicist will hire her and TV shows won’t book her as a guest. But what about her and former friend Anderson Cooper? Are things still frosty?

Griffin’s looking forward to returning to the South and Atlanta, which she’s played many times. She knows to expect the out and proud LGBTQs as always.

“Then you get the down low gays. So, you get the married gays with their wives who for some reason couldn’t make it that night because she’s at Bible study,” she said. “It’s like, ‘Hey girl, I love you. You’re a fierce diva … have you met my wife, Edna?”

Before ending the call, she gave a nod to Georgia politics — which, why not, since everything is about politics these days. Even comedy. Ask Griffin.

“I need you to tell your readers not to fuck up this election. We need Governor Stacey Abrams,” she said. “Tell the baby gays how to register. I don’t want to hear any of this shit with the fucking millennial gays. Somebody drive them over, like souls to the polls, and make them pull the lever for Stacey Abrams for God’s sake.”

Some $2 from every ticket sold on Kathy Griffin’s U.S. tour will go to the Trevor Project and their mission to help prevent LGBTQ youth suicide. Tickets to her “Laugh Your Head Off World Tour” stop in Atlanta on Sept. 21 are available here.