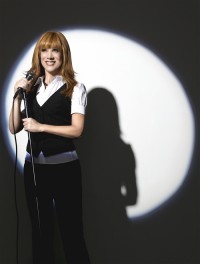 Gay-loving, trash-talking Kathy Griffin brings her roadshow to Atlanta on Saturday and is already aiming her verbal jabs at NeNe, Southern gays, Atlanta and Andy Cohen.

That’s right, bitches! Griffin is here, and she’s not pulling any punches. Would you expect any less from the Bravo star? We thought so.

She talked with her gays at Creative Loafing ahead of her two performances on Saturday — yes, there are some tickets remaining — and dished on NeNe Leakes from “The Real Housewives of Atlanta,” topics for the show, her iconic status among Atlanta gays, and Bravo exec Andy Cohen.

“I love playing Atlanta. It’s the oddest combination of bling rappers and women who love Paula Deen and loud-and-proud gays. My show is going to be like Beer Fest plus Gay Pride, just a Swear Fest, where cursing and offensiveness is celebrated. If you have nothing nice to say, come to the show!”

On the Atlanta gays who will no doubt be packing her two shows at the Fox Theatre:

“Southern gays wear a coat of many colors. They range from DL bros, married, loud and proud. And you know in the dirty South, it’s so hot and everyone’s shirtless, so they have great bodies. I expect a wide-range of body types at my show, but mainly the well-dressed, in-shape body type.”

“Just come to the merch table at my show and look at the bathroom line. The line to the women’s room is nearly empty, and there’s the longest line outside the men’s room. It’s like a live Gay.com meet-up. If I walk by, it’s like I’m fucking Britney Spears.”

On NeNe, who loves the gays enough to pitch her book at Outwrite and gala with them at the HRC Dinner: