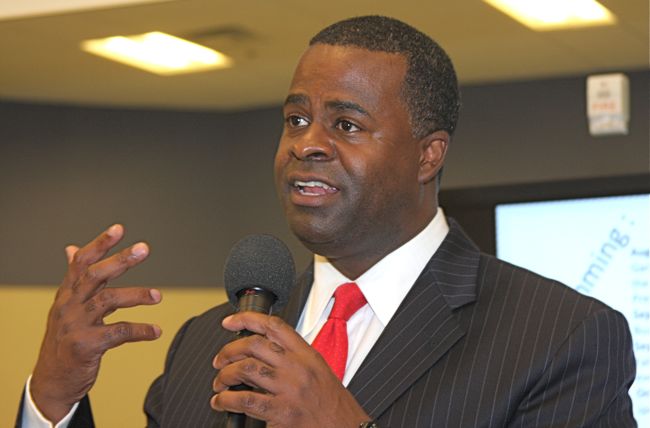 Mayor Kasim Reed sicced a Republican attorney who is besties with anti-gay politicians on a chatty website to quash comments alleging that Atlanta’s chief executive is either a manwhore who likes watching lesbian sex or a guy who hires single young men for gay sex on the down low. Either rumor might help shore up Reed’s troubled relationship with LGBT voters ahead of his re-election campaign next year. But he doesn’t quite see it that way. So Reed, an attorney himself, hired McKenna Long & Aldridge partner Randy Evans to fire off a threatening letter to Lipstick Alley, the website that includes scores of comments speculating about Reed’s sex life and dating habits. Atlanta Progressive News first reported the legal dust up on Thursday.

“Lipstick Alley has published the following false, malicious and libelous statements, among others, about Mayor Reed,” the letter states, then quoting three examples. The letter then goes on to outline three posts, dated September 11, April 25, and January 20, 2012, that make statements about the alleged sexual activities and sexual inclinations of the elected mayor of Atlanta, Kasim Reed, and of several high-level city appointees. “The statements, representations, and false light published by Lipstick Alley are categorically false. There is no factual basis for them. Instead the facts establish that they are NOT true,” the letter states.

Then the legal outlet Daily Report weighed in on Friday.

The letter seems to have been successful – temporarily. According to an Oct. 17 response from Paul Levy of the Washington, D.C-based Public Citizen Litigation Group, Lipstick Alley’s “weak-kneed” web hosting service pulled the site entirely, then restored it “on condition that Lipstick Alley reach a compromise with your client. Instead of consenting to those conditions, Lipstick Alley has found a new hosting service that can be counted on to stand up for its customers’ legal rights.” “Your demands reflect a woeful ignorance of the facts and the law,” wrote Levy. “Lipstick Alley is a forum that allows members of the public to express their views about public figures such as elected officials, professional athletes, and popular entertainers and writers.”

Not be outdone, the Atlanta Journal-Constitution offered this, also Friday:

The letter singles out three posts – from January, April and September of this year – that make statements about who Reed, who’s single, might be seeing socially. In response, the company that had hosted Lipstick Alley pulled the site. A second hosting company, however, has since put it back up. “As evidenced by the fact the first host took it down, you simply can’t print things that are untrue,” said Evans, a prominent Republican attorney who has served as an adviser to former House Speaker Newt Gingrich and lawyer to Gov. Nathan Deal.

That would be Gingrich, the former Georgia Congressman who rode his anti-gay express through the Republican primary before finally crashing and burning. And Deal, who ran one of the most anti-gay election campaigns seen in the state. And on Tuesday, Creative Loafing published its takedown on the case.

“The statements, representations, and false light published by Lipstick Alley are categorically false," Evans wrote. "There is no factual basis for them. Instead the facts establish that they are not true." Reed’s argument, made through Evans, cites three examples of comments from the website to support its argument that they should be removed. The comments allege that Reed trains women, some of whom work for him, “like a pimp,” that he “requires girl on girl action” and that he’s had sex with some female aquataninces, one of whom may be bisexual. The letter says the comments are “false, malicious and libelous statements.”

The letter doesn’t reference other comments left on Lipstick Alley that suggest Reed has sex with men on the down low like this one:

@ rep, yes the D.S. sightings abound plus some private parties with guests that aren't really straight mayor kosher.... I've heard lose word on it, but nothing concrete. But where there's smoke there's usually fire with these things especially in Gaytl, ya know....

This one, speculating on Reed’s hiring:

Chile just give it a rest...Kasim is a one term Mayor...you'd be better off with somebody in his administration...a LOT of single brothers were hired by him...not sure what the deal is with these cats...pushing 40 and highly educated and accomplished with NO KIDS screams DL in the ATL. Sorry but that's just the way we see it...sad but these are the times we Gen X ATLiens live in...

And this one, which offers a safer sex tip:

You'll be getting into a man over 40 in Atlanta who is single but has a girlfriend plus a bunch of women and spends time around gay society circles. Enjoy and use two condoms.

Reed’s been a busy guy these days. In addition to putting a GOP lawyer to work for him, he’s been working MSNBC morning shows and NBC’s “Meet the Press” as a surrogate for the Obama campaign, dancing with old people and spending quality time with the gays at Atlanta Pride. That last one is accurate only if you consider 15 seconds of off-the-cuff remarks at a Pride VIP reception as “quality time.” But don’t worry. Reed doesn’t want to “stifle” free speech on the Internet, just this stuff. Haven't we heard something like that recently? Oh, right. Kasim Reed Complaint Letter And the response from Public Citizen Litigation Group. Public Citizen Response