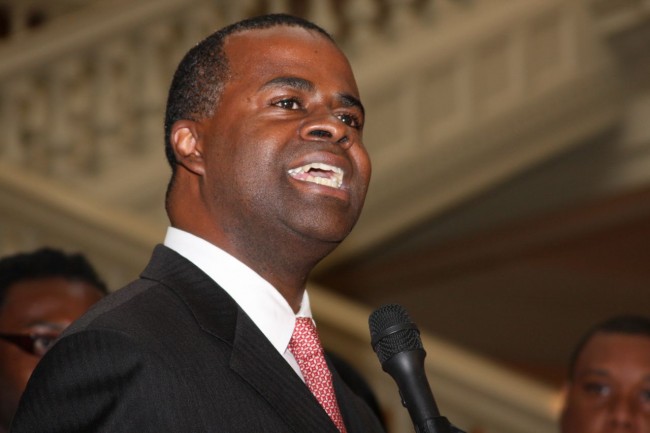 State Rep. Karla Drenner, the only openly lesbian member of the Georgia General Assembly, has a new man. Figuratively, of course.

Drenner formally endorsed her former legislative colleague Kasim Reed’s bid for mayor on Thursday. The announcement came during a press conference on the second floor of the State Capitol where Reed was flanked by several progressive lawmakers with a long history of backing gay rights issues.

The move by Drenner, a five-term state lawmaker, is likely to heat up the competition between Reed (top photo) and his two chief rivals – Lisa Borders and Mary Norwood — for LGBT votes in November.

“Karla Drenner and I have served together for years and she knows me as well as most people know me,” Reed says. “During my 11 years here, I have just worked tirelessly on behalf of issues that have been important to the gay, lesbian, bisexual and transgendered community. I never turned away and I have always fought the best fight I could fight.”

Reed also cited his work on hate crimes legislation in 1999 and other progressive causes during his announcement. He was one of just 14 state senators who voted in 2004 against a proposed amendment to the state constitution banning gay marriage.

The endorsement by Drenner could also help soften the impact of Reed’s opposition to same-sex marriage. Borders and Norwood support gay marriage. The issue surfaced in a candidate meet and greet at a gay bar in May, where Reed received a chilly reception after saying he supports only civil unions. 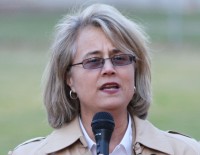 In a statement, Drenner (photo) says Reed has an “unwavering commitment to helping LGBT Georgians.”

“Sen. Reed stood with me as we fought against attempts to ban gay adoption in Georgia and pass a constitutional amendment to ban gay marriage,” Drenner says. “I was proud to work with him in the House to pass hate crimes legislation and most recently legislation that mandates the testing of Georgia inmates for HIV as they exit the penal system.”

“Sen. Reed has shown his visionary leadership and compassion at every opportunity. He is a trusted ally and has the strongest record of any candidate fighting for gays and lesbians. I am certain he will be an even stronger advocate for the LGBT community in the mayor’s office. He has my full support,” Drenner adds.