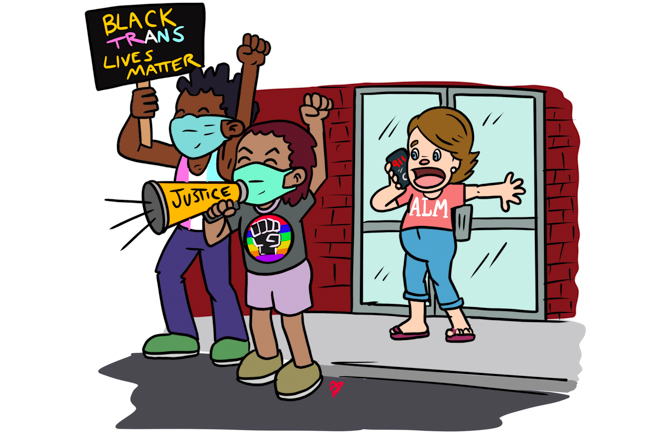 I keep running into resistance when I say police mistreatment of black people is upsetting, but that riots are wrong and have to stop. People don’t seem to get me that you can be pro-Black Lives Matter and Black Trans Lives Matter while still being anti-violence.

I have never held someone’s race or gender identity for or against them. What can I say to people when they act like I have two heads in response to my belief that violence is a step too far and solves nothing?

The issue with what you’re saying lies within what you’re thinking. The good news is that you are just a few word choices and thought processes away from being anti-racist instead of non-racist, pro-everybody instead of pro-“All Lives Matter.”

You’re far from alone, and what may set you ahead of the curve is your willingness to ask the question and hear the answer. Flip one of your statements, and see if you hear the difference:

While you mull that over, the second thing to consider is your definition of the word “violence.” Let’s look at the American Psychological Association’s official definition of “violence,” and it centers on human loss.

“Violence can be an extreme form of personal aggression, such as assault, rape or murder. Emotional abuse can also be considered violence: withholding of resources, verbal attacks, threats to wellbeing.”

The definition goes on to say that certain circumstances can facilitate violence: hot weather, frustration, long-held patterns of insult and degradation, mistrust.

It’s easy to see all of these forms of violence and circumstances at play in this most recent era of unrest. Looted storefronts and shattered car windows are vandalism — yes, they are emotionally compelling, but they are not violence per se. Are we more worried about street fires and loud crowds, or are we ready to do quell the demonstrations by attacking the real violence in our systems and attitudes?

As for demonstrations solving nothing, the vast majority of protests for racial justice have been peaceful. They create discussion and change where it has languished unaddressed for far too long.

In the same way, looking at our own words can help guide internal dialogue. Try prioritizing the problem instead of the response, and work to empathize with what actual violence is and feels like. It’s a great places to start.

Q Advice is intended as entertainment, not professional help. Send your burning Qs to [email protected].

A version of this column appeared in QATLus magazine. Read the latest issue online here: