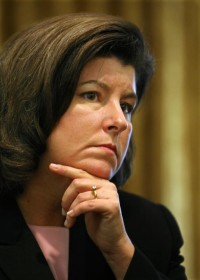 Karen Handel struck back against a federal judge’s ruling against California’s Proposition 8 gay marriage ban, while Georgia’s two other gubernatorial candidates also reacted to the case.

Handel became the first of the three major gubernatorial candidates to speak out on the issue, taking to her campaign’s Facebook and Twitter accounts to condemn it shortly after the ruling was announced Wednesday evening.

On Facebook, she complained about “liberal judges subverting the will of the people.”

I think we are all sick and tired of liberal judges subverting the will of the people to push their left wing agenda. Today is an example — a judge in California held a law prohibiting gay marriage to be unconstitutional. This is a law already upheld by the CA Supreme Court. The judge actually says that “Gender no longer forms an essential part of marriage.” What?

The statement prompted a flurry of more than 100 comments and nearly 60 “Likes.”

Handel’s opponent in Tuesday’s GOP runoff, Nathan Deal, did not react to the ruling on his campaign website or social media accounts. But he criticized the ruling in an interview with the Associated Press.

Deal said the ruling “undermines the credibility of the judicial system and outrages Georgians in both parties.”

Handel has positioned herself as the most vocal in her anti-gay stands after Deal and John Oxendine criticized her in the primary for her support of some gay issues while she campaigned for and served on the Fulton County Commission.

Handel has disavowed any past support for LGBT issues, an effort that earned her the label of “Pants on Fire!” from the Atlanta Journal-Constitution. Last month, apparently emboldened by Sarah Palin’s endorsement, she elevated her new-found anti-gay stands into a crusade against gay marriage, civil unions and even adoptions by gay couples, which Handel said she would support banning as governor. 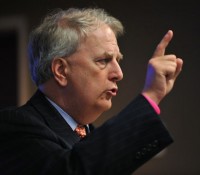 Roy Barnes (second photo), the former Democratic governor hoping to recapture the post, also didn’t react to the Proposition 8 ruling via the campaign’s social media outlets. But he told the Associated Press that he does not favor overturning Georgia’s constitutional ban on same-sex marriage.

Democrat Roy Barnes, who’s already locked up his party’s nomination, said he believes marriage “is between a man and a woman” and is not in favor of changing state law.

A handful of people, including Atlanta resident Bobby J. Hammons, posted messages to Barnes’ campaign Facebook page urging him to support the ruling.

Ok…Mr. Barnes, time for you to make a stand as well, you want our vote then follow Judge Walker!!! Time to prove yourself to all of your supporters!!!!

Ok…Mr. Barnes, time for you to make a stand as well, you want our vote then follow Judge Walker!!!