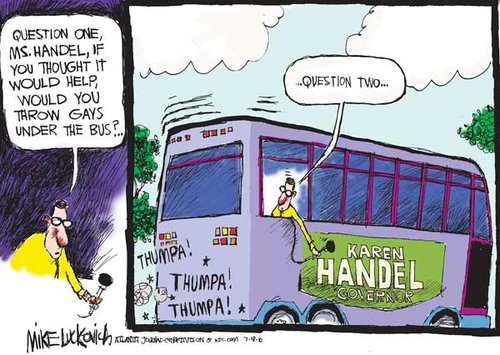 Karen Handel, who’s used a Sarah Palin endorsement and anti-gay screed to catapult into the lead for the GOP nomination for governor, has now turned into a cartoon character. How fitting.

Mike Luckovich, the Pulitzer Prize-winning editorial cartoonist for the Atlanta Journal-Constitution, turned his sights on Handel for his cartoon in Sunday’s edition. Luckovich mocks Handel for throwing gays under the bus, a reference to her rants last week against gay marriage, civil unions and adoptions by same-sex parents during an interview with 11Alive’s Doug Richards.

Handel took her swipes at LGBT Georgians after she was attacked by opponents Nathan Deal and John Oxendine.

The screed delivered, packaged together with Palin’s endorsement, and Handel heads into Tuesday’s primary with a surprising jump into first place, according to two new polls. And just think it was a few weeks ago that the AJC labeled Handel as having Pants on Fire for sketchy recollection of her gay-friendly positions earlier this decade.