Kai Lin Art scares up a hit with ‘Monsters’ 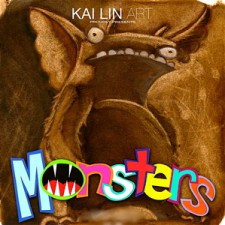 Of course, both Arge and Lin are so much more than gay. Aren’t we all! Arge’s quirky, irreverent star continues to rise in Atlanta’s art world—named Best Local Artist by readers of the GA Voice this month—and Kai Lin Art is becoming a must-attend contemporary art space.

In short, Arge’s participation in “Monsters” is an inspired collaboration that the artist promises is just the beginning for the talented pair.

“I am so excited about this show,” Arge says. “Yu-Kai is already talking about our next moves together.”

Arge designed the promo piece for “Monsters” (photo), a show that features 10 local artists focusing on interpretations of the title theme. But don’t worry. Unlike David Bowie’s famous album, these aren’t “Scary Monsters.” Arge kindly gives us a preview of his contributions.

“When Yu-Kai gave me the theme for the show, his only request was the monsters be happy. My first thought was, ‘A monster is happiest when it’s being mean so, now what the hell do I do?’” Arge remembers. “It was never a question in my mind that I would explore as my theme the monsters of my childhood–both pop culture and imaginary.”

With eight pieces in the show, the artist was able to fully explore that seed of an idea. One hearkens the monsters that live under children’s beds and in their closets, the artist says.

“I don’t remember having any fears like those as a child—because I was gay and I knew it, and I feared others would find out, That fear trumped all the other usual childhood fears,” he says. “So as a comment on this, I did a piece where a child is sitting up in bed screaming while a clearly gay monster under the bed interacts in an agitated manner with a clearly swishy monster in the closet.”

In true Arge form, the piece is titled “MOM! The monster under my bed is fighting again with the monster in my closet—this time about a brunch menu!” 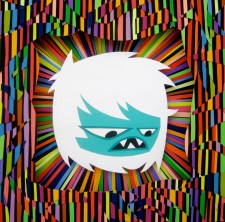 Titles are the stepping stone in Arge’s process, and his sense of humor is intricate to the plot. Take “The Abominable Snow Monster is getting pretty tired of everybody in the North Pole hating on him just because he’s a carnivore who feeds on reindeer and hates everything to do with Christmas” (second photo), which appears in the “Monsters” show.

“I like to work title back,” he says. “First I have an idea, or I’m given a theme—as is the case with the ‘Monsters’ show—then I think of a clever title, preferably one with a strong pop culture reference or double-entendre. Then, we just go to work together—me and the subject of the piece.”

So the subject interacts as an individual entity with the artist? For Arge, absolutely.

“My art consists of everything I’ve shoved in my eyes since birth, and it’s all in my head mingling around like a cocktail party. I’m just the host,” he explains. “There are a billion different themes that can get it on in a billion different ways, and when a piece is ready, it simply reveals itself to me. I go to work on it, and while I’m doing so, the piece then reveals even more about itself along the way.”

And the artist has high praise for the gallery owner, which may explain why past exhibits are so incredibly popular. While his artists aren’t all gay, Lin and his openings most definitively are. Check out photos from the premieres of two recent hits, “Grace | Lush. Ethereal. Color” and “Popstars & Cokeheads” for a taste of the gAy-listers who show for these A-List for events like Friday’s “Monsters” opening and afterparty.

“Every interaction I’ve had with Yu-Kai and the gallery has been just marvelous,” Arge says. “It inspires me that he is completely open to new concepts with both the art and the gallery. I really like that Kai Lin doubles as an event space. I’ve always been happiest for my art to hang in places where there is life around them.”

So with several private commissions in the works, a growing fan base and the “Monsters” show about to take off, what’s next for Arge Art?

“I am exploring working in a more abstract nature,” he says. “I’m such a naturally inclined storyteller that I wonder if I can push myself to maintain a narrative using only color and shapes. It’ll be hard; I’m just not happy until I’ve peed a punch line into a piece.”

And there you have it. We may have just peed a little ourselves.