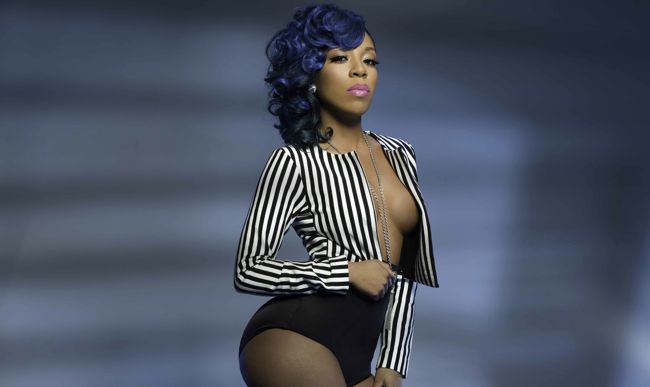 Singer and "Love & Hip Hop: Atlanta" cast member K. Michelle just wants to fuck like the rest of us. But when an urban scandal blog suggested Michelle wants her love lesbian-style, the recording artist shot down the rumor in the best possible way. No hostility. No offense at the salacious and grammatically-troubled outing from Media Take Out. Just a denial by way of saying if she did do lesbian, she'd go big, blond and hot.

If i was gay i would be banging out Taylor Swift

Michelle's tweet came Wednesday, a day after Media Take Out dramatically proclaimed this: "MTO SUPER-DUPER WORLDWIDE EXCLUSIVE: One Of The Ladies On Love And Hip Hop Has GIVEN UP ON MEN . . . She's Now Living Life As A LESBIAN!!!"

MediaTakeOut.com just got some VERY INTERESTING TEA about one of the stars of Love And Hip Hop Atlanta. We just got word from a VERY RELIABLE snitch - that R&B singer K Michelle is now living a GAY LIFESTYLE - with her female lover - and Atlanta woman named Sabrina.

But the story offers no evidence beyond an unnamed source, no photos and no direct quotes.

So the two ladies - being SICK OF MEN - decided to comfort each other . . . and began an EXCLUSIVE lesbian relationship.

Consider that Media Take Out is the same site that said CNN Atlanta gay Don Lemon was sexing it up with Oscar-winning screenwriter Dustin Lance Black. Meanwhile, the attention didn't hurt Michelle, who's conveniently out with a new single -- "I Just Wanna F*uck" -- on iTunes. [via Hip Hollywood, Media Take Out]