It’s been almost 28 years since Madonna showed the world how MTV could turn relative obscurity on African American radio and in New York clubs into the most talked about performer in the world.

Naturally, the gays were on board first, and we never got off the boat. So why shouldn’t we celebrate the pop queen’s birthday every August with Madonna Rama parties aplenty? We should, and child, we do.

As the Her Madge-esty (top photo) turns 52 this year–and looks damn good doing it, we might add–Mary’s already held its annual fete, and we have the photographic evidence. Now it’s time to crank it up a notch with DJ Ed Bailey’s nationally recognized Madonna Gaga Rama Saturday at Jungle.

“It has definitely become one of our Top 5 parties of the year,” says Jungle owner Brad Williams. “Madonna is such an icon; people from their 50s all the way down to their 20s are still all about her. She’s got so much great material, and she’s still doing it. People get ridiculously into it.” 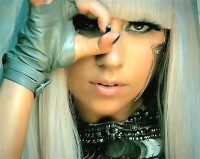 But did we say Madonna Gaga Rama. Yes we did. And calm down. It’s OK.

In addition to Material Girl videos and music, Madonnarama becomes the Madonna Gaga Rama this year. Throwing in some Lady Gaga (second photo) is a natural fit, Williams says.

“DJ Ed Bailey brought this idea to us years ago and does it around the country,” he says. “He has noticed that adding Gaga increases the already huge attendance another 40 to 50 percent by bringing in a new energy and appealing even more to the younger people.”

Not that everybody was happy about it. Williams says that some “diehards” called in to say it was a slap in the face of their queen, but just as many say they love the fact that Lady Gaga is a nod to Madonna’s legacy at the party.

Guests often come dressed in from Madonna’s various looks—which seemed to change each minute in the ‘80s and ‘90s—and the night will be full of all Madonna, all the time—almost. If you’d rather do Gaga, bring it on.

“It’s definitely still more about Madonna,” he says, “but Gaga is like Madonna when she started out, causing a stir wherever she goes and breaking new ground. She has a long way to go, but we think it’s appropriate to add her energy to this particular party.”

Special guest entertainers will also pay homage to the theme, and Bailey brings new mixes and surprises of his own.

“It’s just a lot of fun,” Williams says. “We’re decorating the club for it already. It’s going to be great. It’s an extravaganza.”