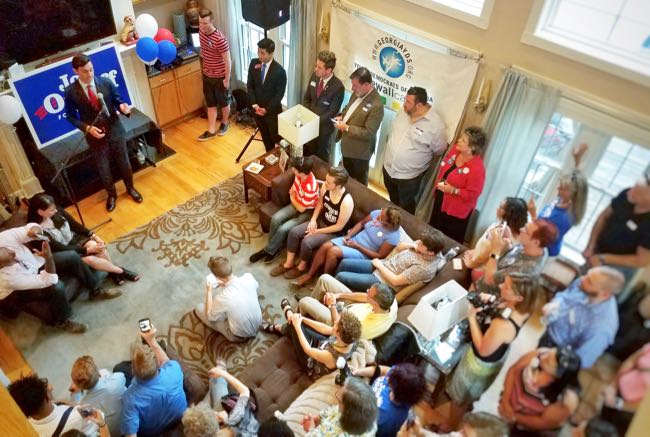 Matt and Barry Levesque trust Jon Ossoff to fight for people like them in the political arena.

They're a gay couple who on Friday celebrated the three-year anniversary of bringing home their adopted children — three siblings who had long been separated by the foster care system.

On that same day, in the Levesque’s cozy Roswell home, Ossoff, the left-leaning candidate vying for Georgia's District 6 Congressional seat, swung by to show his support for the LGBT families and residents in the district (photo). A Democratic LGBT political faction, the Stonewall Caucus of the Young Democrats of Georgia, organized the event, not just to plug its support for Ossoff, but to yield people the opportunity to discuss the future of their civil rights.

Before addressing the packed living room, Ossoff listened to the Levesques, other LGBT families, and a few local lawmakers tell stories of the hurdles they’ve overcome in the pursuit of happiness and equality.

Pitted against Republican candidate Karen Handel, Georgia’s former secretary of state with an anti-LGBT record, Ossoff has pledged to protect same-sex marriage and adoptions by LGBT people. Supporters who attended the event said they worry that Handel, if elected, could threaten and dismantle the rights of LGBT people.

Almost every speaker at the event made a point to knock Handel for remarks she made during her gubernatorial run. In 2010, she openly denigrated gay people's capacity to raise children and said her interpretations of the bible lead her to believe homosexual marriages are illegitimate.

Still, Handel recently claimed she's opposed to discrimination of any kind — all the while lobbying for so-called “religious freedom” legislation. (LGBT activists say such bills could legalize discrimination.)

But people like state Rep. Sam Park, a Lawrenceville Democrat and the legislature’s first openly gay man, said Handel hasn’t changed her tune enough to convince progressive voters that she is, in fact, “compassionate” to people of all walks of life.

“You have a candidate who said in 2010 that she is clearly opposed to same-sex marriage and that she’d be interested in making it illegal for same-sex couples to adopt kids,” Park said to supporters in the Levesque’s home. “That would have made many of the families here today an impossibility. I have not heard her backtrack from those statements.”

Ossoff told the crowd that he is open to working with politicos like Handel, should he claim the Congressional seat.

“I believe that we have to find common ground, but I will never compromise on your civil rights,” he said.

He said he’s striving for “a community where all families and all of those who give the gift of love and dedication to children are honored.”

Ossoff made a similar pledge to stand “publicly and forcefully” with LGBT people during a rally on Sunday.

But getting an independent, progressive political newcomer elected in Georgia is easier said than done, and a few policy experts told Project Q Atlanta that the LGBT vote could tip the scales next week.

Charles Bullock, a political science professor at the University of Georgia, said if the vote ends up being as tight as pundits predict, any base of supporters could make the difference.

“If Ossoff ekes out a win, then the LGBT vote will have played an important, perhaps decisive, role along with other groups,” Bullock said.

“Given the widespread anti-gay rhetoric and the increasing number of discriminatory policy proposals in state legislatures, we shouldn’t be surprised that many of us are keenly interested in the candidate’s positions and the strength and consistency of their support for our community,” Wright said in an email.

State Rep. Park Cannon, an Atlanta Democrat and one of four openly LGBTQ state lawmakers, attended the Ossoff event and told the audience that the time is now to defend against affronts to the progress made by and for the LGBT community. Ossoff, she said, is just the guy to fight for marriage and adoption equity, job security for LGBT people, and equality for people living with HIV, among other things.

Ossoff, in an emailed statement after the event, said he’ll remain a “staunch defender of the principle that no matter who you are or who you love, everyone deserves to enjoy equal rights and to be treated equally under the law.”