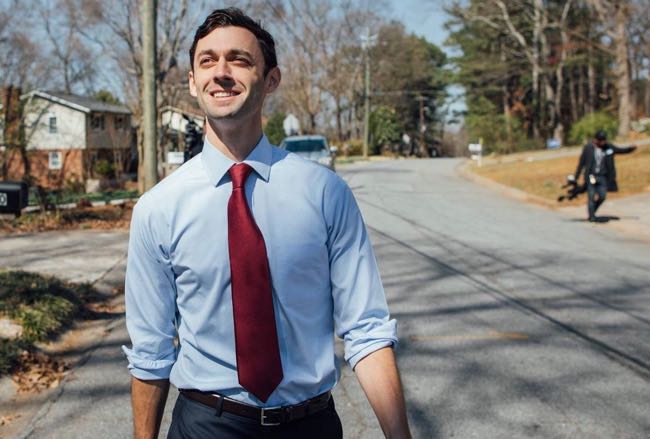 A Democrat and first-time candidate is sparking excitement – and more than a little hope – among LGBT and progressive voters in Atlanta's traditionally conservative 6th Congressional District.

Jon Ossoff, a 30-year-old documentary filmmaker, hopes to best a field of 18 candidates in the April 18 election and avoid a June 20 runoff. In a crowded race that favors Republicans, that's a heavy lift.

Yet as much as Ossoff is invigorating progressive activists, he's also putting a scare in the GOP field. Another poll – this one of registered voters released Tuesday by 11Alive – again gives Ossoff a commanding lead.

In the 11Alive poll, Ossoff grabs 43% of likely voters. Republicans Karen Handel (15%), Bob Gray (14%), and Dan Moody (7%) round out the top four. All other candidates combined make up 15%, and an additional 7% are undecided. Right now, Ossoff polls below the 50% needed to avoid a runoff.

“Polls are just polls. Now, it's all about turnout,” Ossoff told 11Alive's Matt Pearl. “Turnout is key, but so, too, is uniting people around our vision for a local economy.”

Ossoff, who includes LGBT issues among his campaign priorities, pledged to the Georgia Voice to be “a strong and outspoken ally of the LGBTQ community.” Which would be quite a change for a seat held by former Rep. Tom Price, a Republican who fought LGBT equality every change he got, and his GOP opponents. Among them is Karen Handel, who has found “compassion” for LGBT people after years of cementing her anti-gay cred.

Ossoff quickly rose to the top of an LGBT-friendly group of Democrats in the race. Here's how his campaign website addresses LGBT issues.

As our representative in Congress, Jon will fight tirelessly against discrimination, hate speech, or violence against Americans on the basis of their race, religion, gender, sexual orientation, or place of birth.

Ossoff's support of LGBT issues has been rewarded with an endorsement from the Pride Fund to End Gun Violence. The PAC announced its support for Ossoff on March 16.

“With former Georgia Rep. Tom Price’s recent confirmation as Secretary of Health and Human Services leaving an open seat, this special election is a prime opportunity to elect a Democratic candidate who will stand up and speak out for LGBTQ equality,” the group said.

Jason Lindsay, the PAC's founder and executive director, told the Georgia Voice that Ossoff was an easy choice for the organization.

Lindsay said the PAC reviewed Ossoff’s platform and record, and said he represents “the kind of leader we need — one who won’t prioritize special interests over Americans’ civil rights and safety.”

Ossoff also has the backing of Rep. John Lewis, the longtime Atlanta representative beloved by LGBT advocates for his staunch support of equality issues.

Ossoff's campaign has also excited LGBT politicos, who have hosted house party fundraisers for the campaign and endorsed him. Reps. Karla Drenner and Sam Park, two of the four openly LGBTQ members of the Georgia legislature, were among several state lawmakers who backed his campaign during a March 30 event at the State Capitol.

The race is attracting national attention and nearly $4 million has poured into Osoff's campaign. It's also outed liberal and progressive voters in a historically conservative district to volunteer, launch new political groups and attend their meetings. Via the New York Times:

Afterward, supporters stayed behind, describing their surprise that so many liberals had come out of the woodwork. “It’s almost like being a gay person and realizing there are other gay people in the world,” Tobie Kranitz Walters, a business consultant, said.

Many newly hatched activists described a similar pathway, from feeling abashed about sharing their political views before November to feeling emboldened to act out of anger at the Trump administration.