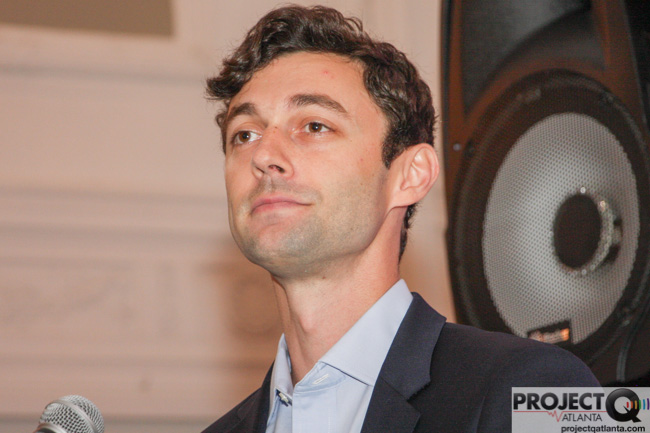 Jon Ossoff – the candidate who embraced LGBT people and pledged to be their staunch defender – received a warm welcome and was mobbed by supporters during an event that celebrated the best in gay Atlanta.

Ossoff was on hand Thursday to pick up his Best Politician award during the Georgia Voice Best of Atlanta celebration. Ossoff earned the accolade from readers, beating out mayoral candidates Mary Norwood and Cathy Woolard. Ossoff delighted the crowd with remarks blasting the Trump Administration, urging them to continue their fight for progressive values, and again promising to be an advocate on LGBT issues.

“The LGBT community will be able to count on me as an ally every day – whether as a candidate for office or as a private citizen,” Ossoff told a crowd of hundreds in a ballroom at the Georgian Terrace.

“I am inspired by your perseverance and the continued struggle for human rights and I'll be fighting right along side you,” he added.

Ossoff, a Democrat, lost to Republican Karen Handel in a runoff last month in Georgia's 6th Congressional District. He inspired progressive supporters and raised more than $30 million – the most ever collected in a House race – and contrasted Handel's anti-gay views by being outspoken in his support for LGBT issues and attending LGBT events. Ossoff lost the race by four points.

On Thursday, he urged the crowd to “stay true to the values that unite us.”

“While generations have sacrificed so that our country might fully realize and build upon its founding ideals, politicians at the highest level continue to implement policies that are founded on racism and homophobia and chauvinism,” Ossoff said.

“And yet amidst all of this darkness, there is great reason for hope. And what we have just demonstrated here in Georgia, and what is becoming clear across the country, is that ordinary citizens are wide awake to the corruption, the deception, the lack of concern for human well-being that have set in like a rot,” he added.

Ossoff also leveled stinging criticism at President Trump, a critique he avoided during his high-profile campaign.

During the campaign, Ossoff received a hero's welcome at an HRC gala, told LGBT families he'll be their “staunch defender” and pledged to “forcefully” stand with gay Atlantans during an appearance at the Atlanta Equality March.

“We have a lot of work to do,” Ossoff said last week.