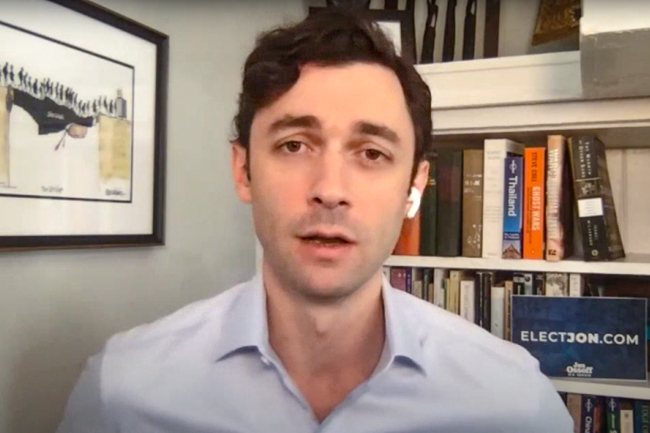 “There’s no place for discrimination on the basis of sexual orientation or gender identity,” Ossoff said. “Those should not be merely a matter of principle, but a matter of law.”

Ossoff said his commitment to LGBTQ Georgians comes from “a deeply rooted belief in the equality of all people and commitment to expanding human rights and to ensuring that everyone … is treated with the compassion and dignity and respect that they deserve.”

During the discussion, Ossoff said he would be a “strong vote” for the Equality Act, which would add gay, lesbian, bisexual and transgender people to protected classes in existing civil rights legislation. It would strengthen a recent Supreme Court decision that include those categories on the basis of “sex.”

Ossoff’s LGBTQ support – which he has called “unwavering” since his unsuccessful 2017 bid for Congress in Georgia’s 6th District – was a jumping-off point to discussions of what’s at stake on the national stage this election cycle, his opponent’s record, racial justice, voter suppression, as well as LGBTQ issues including trans healthcare.

You can watch the interview below and here, and you can listen to the audio on Podcast Q below or on your favorite audio app.

Ossoff gained the Human Rights Campaign endorsement in the race in July. The organization called him a “true ally,” which Ossoff said was support he hopes is earned and that he can build and consistently re-earn.

The same goes for gains in LGBTQ equality, which are tenuous thanks to changes made by the Trump Administration that Perdue has backed, Ossoff said.

“Even among a lot of people my age, we forget how swiftly our society has evolved on equality just in the last 10 to 15 years, how far we’ve come, how fast,” said Ossoff, who is 33. “The flip side of that is, how fragile those gains are. … that can’t be taken for granted. Because these gains can slip swiftly and there are people working hard to undo them.”

This year, the administration changed Affordable Care Act rules to allow healthcare providers and insurance companies to turn away transgender people and discriminate against HIV-positive people.

“My opponent, David Perdue, who has persisted, for example, in supporting a Supreme Court lawsuit that would repeal protections for people who are already sick to their health insurance, and this cynical effort by the Trump administration to try to allow discrimination on the basis of gender identity, it’s disgusting, it has no place in our politics,” he added.

“First of all, leaders and people seeking office and those who hold elected office need to speak publicly about the appalling level of violence that transgender people of color in America face,” Ossoff asserted. “As we work to strengthen civil rights laws, awareness of the appalling levels of brutality and discrimination and violence, including incarceration, faced by transgender people of color will help us ensure that strengthen civil rights laws are attentive to and responsive to swiftly and with strength.”

Criminal justice reform is integral to changes Ossoff hoped could be brought about by the current demonstrations and attention to racial justice. He specifically called out the George Floyd Justice & Policing Act, which is languishing in the U.S. Senate, as a needed step.

“Everyone in America should feel secure in who they are, in their identity, free from fear of persecution, targeted violence, and bullying,” he added.

When the conversation turned to voting, Ossoff heralded efforts in Georgia to wipe out voter suppression and put the onus on voters to do their part in helping encourage others to vote.

“This has to be a bottom-up, communitywide, movement-style effort to generate record turnout,” he said. “We do have a very robust phone banking, text banking, voter outreach, voter education program.”

Ossoff hammered home the date Oct. 12, which is when early voting opens in Georgia, as the target date to think about voting, and to consider Nov. 3 as the last possible date to vote. And “for the good of the country,” Ossoff tried to persuade voters to pick him.

The candidate singled out Perdue as a lawmaker who failed to protect constituents from coronavirus, sells access to his power, and spends too much time on a private island. He said his opponent would happily overturn marriage equality, the rights of same-sex couples to adopt children, and the rights of LGBTQ service members to serve openly in the military.

“[Perdue] has views on these issues that are discriminatory, that are rooted in my opinion in a personal view of the world that he has apparently and seeks to impose on others,” Ossoff said. “Senator Perdue is wrong on the issues. He’s seeking to impose his personal morality on the people he’s sworn to protect and serve, and he needs to be defeated.”

Find more on Ossoff at electjon.com.

Alex Wan – a longtime non-profit leader and the first gay man elected to the Atlanta City Council – now leads the board that...
Read more
Politics

A bill that bans transgender women from high school sports passed a Georgia Senate committee on Wednesday, becoming the fastest-moving of at least four...
Read more