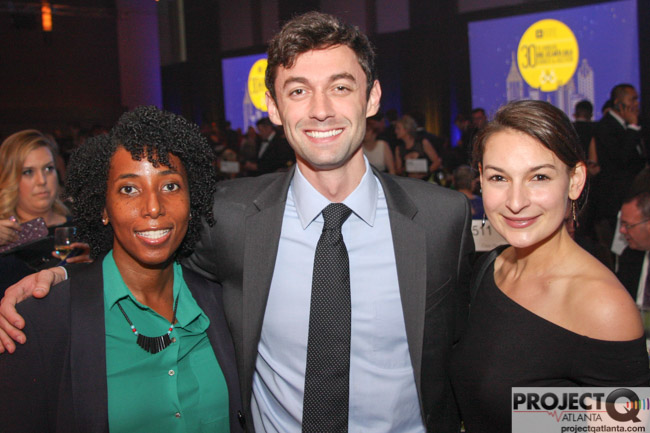 Jon Ossoff received a hero's welcome on Saturday, generating buzz and getting mobbed by supporters as he and other candidates and elected officials took part in the 30th Annual HRC Gala Dinner & Auction.

When Ames Simmons, an HRC board member, read Ossoff's name on the list of candidates attending the gala, the sold-out crowd of about 1,300 people erupted into applause. That turned into a standing ovation and the warmest response any candidate received at the event.

The LGBT enthusiasm came four days after Ossoff topped a field of 18 candidates and nearly scored an upset win in a suburban Atlanta Congressional District. He faces Karen Handel, a Republican former Georgia Secretary of State, in a June 20 runoff. Ossoff and Handel hold starkly different positions on LGBT equality.

Ossoff was greeted with a similar response on Thursday during the annual fundraising dinner for Georgia Democrats.

Other candidates included City Council member Alex Wan, who is running for City Council president, and Kirk Rich, who hopes to take Wan's place in District 6. Both men are gay.

Also in the crowd was Simone Bell, the former Georgia lawmaker who is now regional director of Lambda Legal's office in Atlanta. In 2009, Bell became the first openly gay black person elected to a state legislature in the U.S.

UPDATE | Peter Aman, who is running for Atlanta mayor, attended the gala. Aman also appeared at the event in 2016.