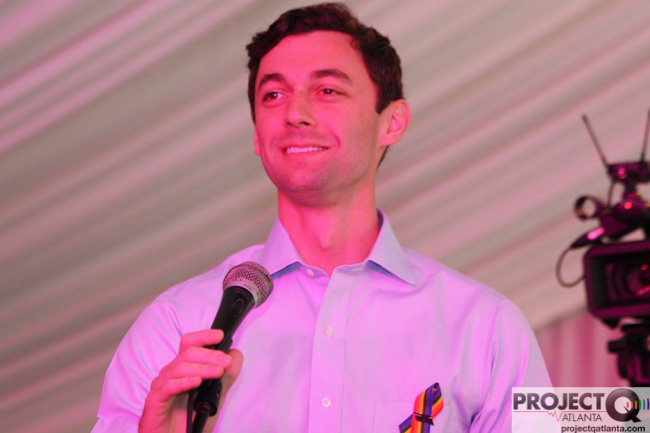 Jon Ossoff, locked in a tight race for Georgia's 6th Congressional seat, pledged to stand “publicly and forcefully” with LGBT people on Sunday as hundreds took part in the Atlanta Equality March.

“You will be able to count on me to stand up for you every day. I will never shy away from standing with the LGBT community publicly, forcefully, with everything I've got,” Ossoff said.

Ossoff was greeted with loud applause from the overflowing crowd inside Park Tavern, similar to the hero's welcome he received in April during his appearance at the 30th Annual HRC Gala Dinner. Ossoff was one of several political candidates to address the crowd before it moved outside to Piedmont Park and then marched west on 10th Street, along Juniper and back into the park.

Ossoff, a Democrat, is in a fierce race against Republican Karen Handel. Ossoff has backed LGBT equality efforts, providing a stark contrast with Handel. The former Georgia Secretary of State has expressed compassion for LGBT people and said they shouldn't face discrimination. But she has gone on anti-gay benders in past races and objected to same-sex marriage and adoptions by LGBT people.

On Sunday, Ossoff said his campaign has been boosted by a “coalition of supporters from across the political spectrum.” Two days earlier, on Friday, Ossoff met with LGBT families during a campaign event in Roswell.

“I look out at so many beautiful people here today from so many diverse backgrounds, united, standing up for equality, a fight that has been waged for decades and that must continue,” Ossoff said at the march.

“And you look like the so many people from diverse backgrounds that have been knocking on doors and making phone calls and pounding the pavement for months across metro Atlanta to make a statement about what we stand for,” he added.

Ossoff and Handel face off in a runoff on June 20.