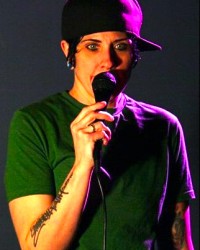 So who won the Tammy vs. Tammy laugh smackdown? “Tammy,” Smith says, deadpan.

Kidding aside, it was Tammy Imig who ultimately took Round 1 by audience vote. That puts her up for the semi-finals later in the series. The Joke Off Wars continue Thursday with Round 2, just in time to soothe the cabin fever that ails you as Snowpocalypse turns into Thawmageddon.

The Midtown Comedy shows have graced Bellissima for months, but Smith says Midtown’s smoke-free lesbian bar—with male, trans and every other kind of friend invited too, of course—likes to shake things up on its weekly roster of events.

“I like to try new things to do so the audience keeps coming each week,” Smith says, noting that there are no early favorites to win Joke Wars—except Ellen Degeneres.

“She hasn’t confirmed yet, but I’m sure I’ll be getting an email any day now,” Smith jokes.

In addition to the competition, Smith and guest acts each week round out the lineup. Here’s the remaining Joke Wars schedule and how it builds toward a hilarious crescendo, the championship title, and the coveted $100 prize (Sorry “DWTS” fans, no mirror ball trophy):

The Midtown Comedy Show continues each week even after the champion is crowned. Comedians who want to get their act on stage can {encode=”[email protected]” title=”e-mail Brady Smith”} with their credits and availability.

“I normally say to the ladies, Bellissima is a lesbian club, but you don’t have to be gay to attend—or to get my number,” Smith says with a wink.

Each Thursday, doors open wide at Anna Ragghianti’s Amsterdam Walk lounge at 8 ?p.m., and the comedy shows start at 9 ?p.m. Hang with club music before, during and after, plus free parking and great food are always in store. It’s just $5, so come out and have a laugh and a drink. You deserve it.