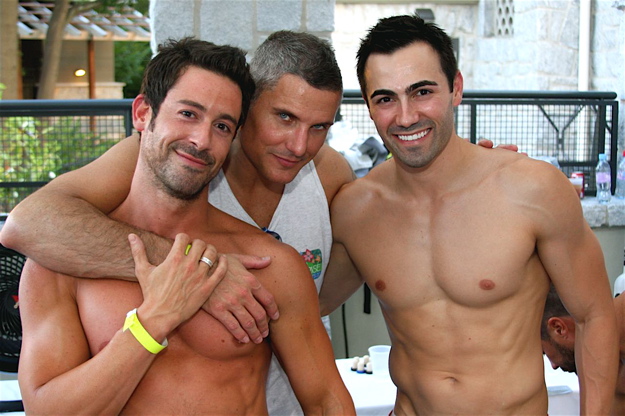 In its 23rd year, Joining Hearts is more than ready to set the parties-with-purpose standard once again with Saturday’s main event, plus more pre- and after-parties than you can handle. But we figure you’ll have fun trying.

“We are tremendously excited,” says Ben Hadsock, Joining Hearts’ board chair. “We have some surprises in store for this year, but we can’t give those away just yet.”

As we reported this week, general admission tickets to Joining Hearts 23: Splash with DJ Roland Belmares (second photo) at the Piedmont Park pool are sold out. (Flip through the photos from last year’s event—including top photo—and you’ll see why.)

If your ticket is reserved or in hand, you’re set. That’s the only piece of bad news in this entire post, so if you simply must attend all the fun that is Joining Hearts Weekend, by all means do not panic and keep reading.

For one thing, patron-level entry to the pool party is available, though it is $200 a pop. Check out our report and photo album from the most recent patron appreciation party to see what proactive benefactors got for the money. Keep in mind that one of the Joining Hearts tenets is that 100 percent of all money raised goes to the beneficiaries—Jerusalem House and AID Atlanta—and is tax deductible. That’s made possible by the patrons and sponsors.

The organization has donated more than $1 million to Jerusalem House and AID Atlanta’s Joining Hearts House in the last 22 years, so you know not only that the party is off the chain, but exactly where your money is going.

“The mission of Joining Hearts is to raise desperately needed funds for people living with HIV/AIDS in Atlanta,” Hadsock says. “Because of our donations, families have been able to stay together in a safe, supportive environment.”

Now, if the patron entry fees just make it impossible for you to go to the pool party on Saturday, don’t fret. Parties with renowned DJs and tons of people that you can attend begin Thursday and continue until early Sunday morning. These parties also benefit Joining Hearts the way other fun events have this season, including a foam party, a pool party, a beer bust, dine-outs and with a handful of car washes.

This weekend’s signature shebang kicks off Thursday during the weekly Indulge event at the W Midtown. This week, Indulge hosts the Joining Hearts Kickoff with DJ Scott Anthony. And that’s just a warm up.

Now don’t stay up too late. The real deal could keep you up all night—literally—on Saturday if you’ve got the stamina. The main event starts at 4 p.m. and flows directly into the Joining Hearts Afterparty with DJ Oren Nizri (fourth photo) at Jungle beginning at 10 p.m.

After closing time at the club, the Joining Hearts After Hours party with DJ Martin Fry (bottom photo) spins into action and keeps going (and going, and going) until 8 a.m.

And remember, it’s a party for a good cause. Like you need an excuse to throw down, but still.

“Joining Hearts’ success is a result of the gay community in Atlanta coming together for a homecoming of sorts,” Hadsock reminds us. “It is viewed by many as a big family reunion. Since the event originally began because we were constantly losing people to AIDS, it is such a joy for everyone to come together once a year to ‘Celebrate Life.’

“It has simply grown into something more meaningful than a fundraiser or a party, it builds up our community,” he says. “Every person who attends or donates to Joining Hearts in some way should take pride in the fact that they are doing something kind and unselfish for people that can’t help themselves.”