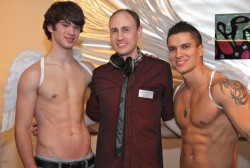 VIEW PHOTOS | Love on the Rocks @ Cantoni It’s the season for lovers, after all, so what better time for a non-profit named Joining Hearts to host its annual Love on the Rocks than Valentine’s Weekend. You might know Joining Hearts as organizers of the wildly successful pool party at Piedmont Park each summer. Yes, that one. It sells out, offers hundreds and hundreds of shirtless hunks partying around a pool and last year helped fuel the group’s $125,000 donation to HIV non-profits. 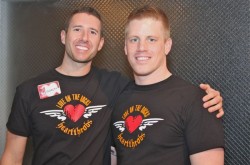 But the organization opens its event season with Love on the Rocks. On Sunday, Cantoni in Midtown provided the backdrop for the fourth annual Valentine’s cocktail party with DJ Mike Pope powering the music. Party-goers nibbled on tasty treats from Bridge Catering while knocking back Grey Goose Cocktails served up by sexy bartenders dressed in snugly fit “heartthrobs” t-shirts (second photo). Caliber Models provided shirtless, sexy cupids (top photo with Pope), and Delta Air Lines offered up flight attendants to serve the drinking pleasures of the large crowd. 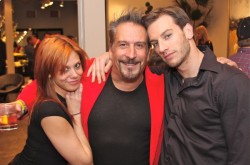 A VIP area offered specialty drinks, gourmet coffee, a chocolate bar and a swag bag with a commemorative CD. VIPs on hand included celebrity hair stylist and photographer Richie Arpino (center, third photo), his sandwich king partner Mitchell Anderson and gay City Council member Alex Wan, among many others. Joining Hearts is gearing up for a big year. They rallied volunteers and hosts during an event last month and benefitted from Party Like a Rockstar 5.0 on New Year’s Eve. They rounded out 2010 with their Wish List Party in mid December. All of that helps the build up to the Change of Seasons Tea Dance this spring and Joining Hearts 24 on July 23.