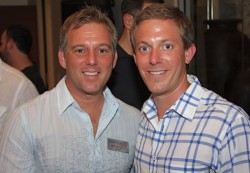 After throwing parties with a purpose for 22 years, organizers of Joining Hearts know this rule: Take care of the sponsors, patrons and volunteers that make your events happen.

So just days away from their party of the summer, the non-profit did just that with its Patron & Sponsor Appreciation Party on Sunday in Castleberry Hill just south of downtown Atlanta. They also announced this bit of news between tracks from DJ Mike Pope and the restocking of a spread of hors d’oeuvres from Bridge Catering that would make Martha Stewart blush: Splash, the official name of Saturday’s 23rd rendition of the hit party, is sold out. 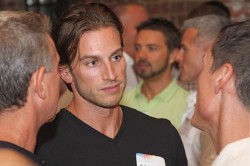 (Flip through the photos from last year’s event and you’ll see why.)

But don’t shed a tear just yet, party gays. If you haven’t yet snagged your tickets – procrastinate much? – there’s still a way to gain entrance to Saturday’s event. Become a patron or sponsor – contributions began at $200 – and you’ll get yourself into the event. But hurry, as even that option will close later this week.

Back to Sunday’s party. It was hosted in an expansive private residence that once was some sort of warehouse. The exterior is non-descript, but once inside, visitors are treated to what surely has graced the covers of an interior design magazine and deserves its own HGTV special. And more than one gay guy commented that the master bathroom featured a shower area large enough for a Bel Ami production. 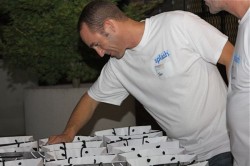 Like we said, these folks know how to throw a party.

In 22 years of Joining Hearts, they’ve donated more than $1 million to Jerusalem House and AID Atlanta. With 100 percent of every dollar raised through ticket sales and tips going to the beneficiaries, it’s the sponsors, patrons and volunteers that help make that possible. 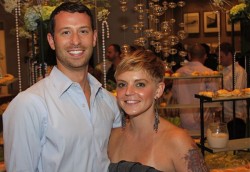 The swag neatly packed inside – it was a gay event, after all – included a 200 milliliter bottle of Grey Goose Vodka – we’re drinking that right now! – a CD from Pope – we’re listening to it right now! – a cookie from Bridge Catering – we ate that on the drive home Sunday night! – a Joining Hearts wristband – no doubt to be worn with the accompanying t-shirt! – a mouse pad from Mitchell Gold + Bob Williams – we’re clicking on it right now! – and discounts from several sponsors.

Sunday’s event was one of several Joining Hearts has thrown this year in the buildup to Splash. They’ve raised money with a foam party, a pool party, a beer bust, by dining out and with a handful of car washes. So rest up – you’ve got until Saturday at 4 p.m.