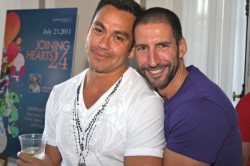 Not content with throwing the gayest, biggest pool party in Atlanta for charity each summer, the Joining Hearts crew reinvigorated the tea dance on Sunday.

Joining Hearts, the non-profit behind the massive pool party in Piedmont Park each July, put its own spin on Sunday tea with Change of Seasons at the upscale Georgian Terrace. The mix of ballroom and balcony proved enticing on a beautiful sunny afternoon as a crowd of hundreds packed the event. 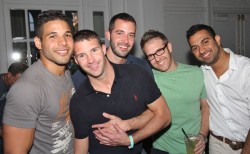 The tunes of DJs Mike Pope and David Knapp didn’t hurt, either.

The event continues the group’s build-up to Joining Hearts 24, which is set for July 23 at Piedmont Park. Change of Seasons helps raise funds for the organization to stage its signature event, which in turn benefits Atlanta-area HIV agencies.

In September, the group donated a record-setting $125,000 to AID Atlanta and Jerusalem House. That brings the total the organization has raised since its inception to more than $1.15 million. 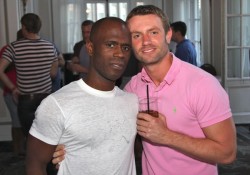 Sunday’s tea dance continues a busy year for Joining Hearts. In February, they hosted Love on the Rocks over Valentine’s Weekend. They rallied volunteers and hosts during an event in January and benefitted from Party Like a Rockstar 5.0 on New Year’s Eve. They rounded out 2010 with their Wish List Party in mid December.

Up next for Joining Hearts: The non-profit benefits from the appearance on Friday, April 22 of the Freemasons at the Heretic. The U.K. dance band regularly scores Top 20 hits on U.K. dance charts.