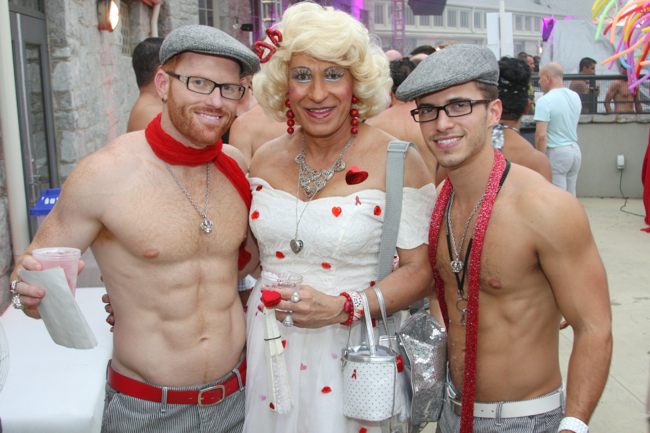 VIEW MORE | Takeover Midtown benefits Joining Hearts VIEW MORE | DJ Tony Moran's Joining Hearts Afterparty VIEW MORE | DJ Alyson Calagna makes GA Boys dance at Joining Hearts Tea Party With the buildup complete, the margaritas tipped and the hoses grabbed, the biggest and gayest pool party of the year unfolded on Saturday in Piedmont Park. Yes, the gays turned out in force for Joining Hearts 25. DJ Roland Belmares drove the shirtless dancing queens into a frenzy, a little rain and thunder be damned. This was a party with a cause, after all, and organizers hope the sold-out crowd of about 1,000 people helps raise the $250,000 they expect to donate to AID Atlanta and Jerusalem House. If they hit their fundraising mark, Joining Hearts will set a new record for its annual donation. And those Joining Hearts abs sure do raise a bunch, totaling some $1.34 million since its inception. Last year’s event brought in a record $185,000. For their part, the more than 200 volunteers that made Saturday’s gay soup offered their thanks on Sunday.

Thanks Atlanta for another AMAZING year - JH25 was a success because of all of you!! Thanks again for your continued support!!