Join us for a Q Conversations live event with Nikema Williams 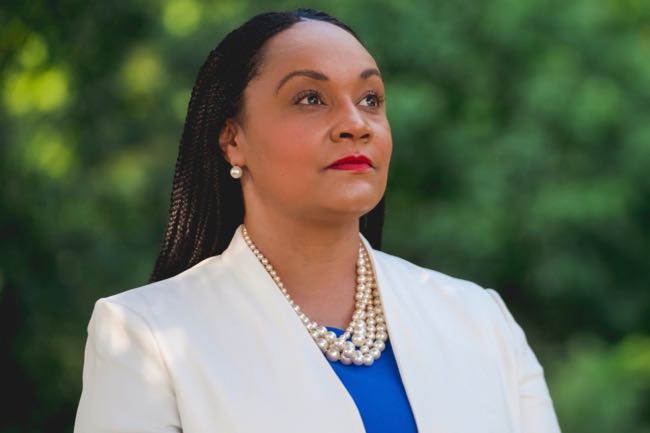 UPDATE | Staffers for Williams said late Sunday that her schedule has changed and she is no longer able to attend the event. So the event has been canceled.

Join us Monday, Nov. 2 at 3 p.m. for a live virtual discussion with state Sen. Nikema Williams – chair of the Democratic Party of Georgia and a candidate for Georgia’s 5th Congressional District.

Williams was elected to the Georgia State Senate in 2017 and in 2019 was tapped to chair the state Democratic Party – becoming the first Black woman ever elected to the post. Earlier this year, following the death of U.S. Rep. John Lewis, Democratic party leaders named Williams to replace him on the Nov. 3 ballot.

RSVP now to join Monday’s event and to let us know what questions you have for Williams.

Can’t make the event on Friday? Go ahead and RSVP. A recording of the conversation will be available later.

Nikema Williams is a passionate advocate for protecting women’s rights and access to healthcare. She serves as deputy director of civic engagement at the National Domestic Workers Alliance. Before that, she served as vice president of public policy for Planned Parenthood Southeast for 10 years. In November 2018, Williams was among 15 people, including several LGBTQ activists, arrested at the State Capitol during a protest over voting in the midterm elections.

Matt Hennie is the founder of Project Q Atlanta, a media outlet covering LGBTQ issues since 2008, and has worked in local journalism for more than 25 years.