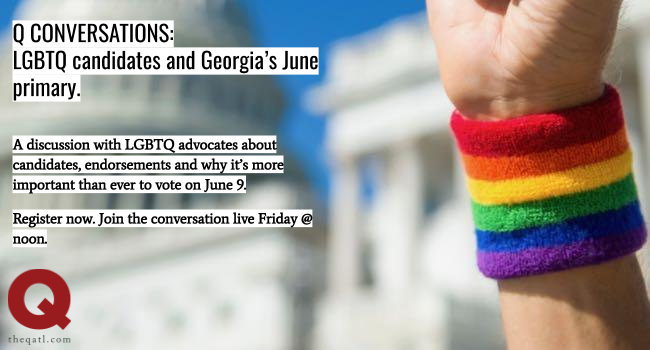 It’s a pandemic. Protests over police brutality are filling the streets. Calls for justice and equality are growing louder. In the middle of the chaos, it’s also primary day in Georgia on June 9.

What’s happening around us shows that voting is still as important as ever.

So we’re tackling Georgia’s primary and how you can vote for LGBTQ equality in our first-ever virtual event. Q Conversations launches on Friday.

Join the conversation on Friday, June 5 at noon to hear from LGBTQ advocates Jeff Graham, Kenyatta Mitchell and Fred Smith about the primary. We’ll talk about the record number of LGBTQ candidates, endorsements and the importance of getting out the vote. We’ll also answer your questions. (The event is free but registration is required.)

The conversation on Friday will be hosted by Matt Hennie, the founder of Project Q and a longtime journalist who’s been covering LGBTQ Atlanta for nearly two decades.

Graham is the executive director of Georgia Equality, which is an organization working to advance fairness, safety and opportunity for gay, lesbian, bisexual and transgender communities throughout Georgia. Graham began advocating on LGBT and AIDS-related issues as a college student in the mid-1980s.

Mitchell is a principal in the Atlanta office of Paramount Consulting Group. She has more than 15 years of experience in business development and government relations and has policy experience as the result of work for both Democratic and Republican governors in Georgia. She is also the board chair for Georgia Equality, Inc.

Smith is an associate professor at Emory University School of Law and in 2019 was named the law school’s Outstanding Professor of the Year. He serves on the LGBTQ Advisory Board for Atlanta Mayor Keisha Lance Bottoms and the board of Lambda Legal.

Register now and we’ll see you on Friday!