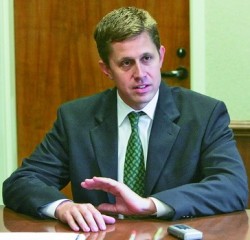 The number of LGBT candidates on the ballot now stands at 15, though as Johnny Sinclair seeks to reclaim his Marietta post he does so with personal financial problems playing out publicly as he campaigns.

Sinclair, a Realtor who left the council in 2005 after two terms, qualified for the ballot Sept. 1 with little fanfare among LGBT residents in metro Atlanta. And since, he has not reached out to LGBT voters and media outlets in the same manner as most other gay candidates.

In a recent profile in the Marietta Daily Journal, Sinclair labels himself a consensus builder who is financially conservative, opposes raising taxes and favors a transparent city government.

But as he campaigns to unseat incumbent Holly Walquist for the Ward 3 seat he first captured in 1997, he does owing more than $70,000 in federal and state taxes, according to the Atlanta Journal-Constitution. Sinclair says his financial problems leave him “down to the bare bones, borrowing money from family members.”

“I think instead it gives me a new appreciation for what the average American taxpayer is facing,” said Sinclair, a Realtor who previously served on the council from 1998 to 2005. He said he “absolutely” can be trusted to make the right decisions about city finances.

The Georgia Department of Revenue filed a lien in May saying he owed $733.76 on his 2003 state taxes.

Bates, Hammet and deNobriga are incumbents. Sinclair served two terms before deciding against running again in 2005.