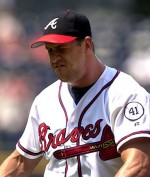 Saying that John Rocker has rage issues is, well, stating the obvious.

The former Bad Boy of Major League Baseball and the Atlanta Braves is at it again. You think the guy would learn from his past mistakes. He hasn’t.

Last Thursday, Rocker crashed the grand opening of the W Buckhead and didn’t miss the chance for some verbal sparring with Steak Shapiro, a local sports radio jock that has assailed Rocker in the past for his rocky tenure with the Braves.

When the two egos collided in the hotel’s swanky Whiskey Blue nightclub, even grizzled sports fans were a bit taken aback. To say the screaming match was impolitic is generous, according to Rocker’s recounting of the conversation with Dead Spin:

AJD: Did you call him a “jew faggot”?

JR: I don’t think I said anything about him being Jewish…

AJD: Good! Did you call him a faggot?

AJD: Okay…did you call him a “motherfucking cocksucker”?

JR: Yeah, I definitely did. I like saying that. I say that a lot.

Rocker says the conversation escalated into something more only when Shapiro called him a redneck. Shapiro tells Southern Voice that Rocker was staring him down from across the room.

“It [faggot] is one of his favorite terms and he used it multiple times,” Shapiro told SoVo. “His exact words at least three times [were], ‘You Jew faggot.’ He is a pathetic guy.”

Rocker was escorted out be security. But to make matters worse, Rocker appeared on Rock 100.5’s “The Regular Guys” on Monday and defended at least a portion of his comments.

Rocker claimed Shapiro provoked him and said, “I don’t know why Jew is a bad word.”

All this from Rocker, who was briefly suspended by MLB and later released by the Braves for racist and anti-gay comments he made in 1999 when he explained to a Sports Illustrated reporter why he wouldn’t want to pitch for a team in New York.

That kicked off a national firestorm, which included protests in Atlanta. He served a 14-day suspension to start the 2001 season and was fined $500. The Braves dumped him in 2001. He floundered for three other teams before eventually retiring in 2005 after failing to rise above the minor leagues after shoulder surgery.

In other notable moments, Rocker made his acing debut in 2002 as a murderous golf-club groundskeeper in the horror comedy “The Greenskeeper.”

Last year, he surprised no one when he told an Atlanta radio station that “Bud Selig knew in the year 2000 John Rocker was taking the juice.” That came a year after Rocker was implicated in a steroid ring.
Roid rage. It all makes sense now.

The AJC takes a look at Rocker over the years through a photo gallery, while Outsports also chimes in with reaction.