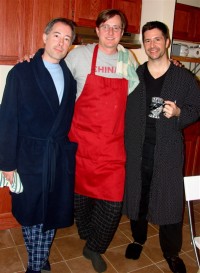 A new artist collective of three gay Atlanta men from multi-discipline backgrounds plans “Memory Flash,” a roaming LGBT oral history/art installation/living memorial set for April 3. Prepare for a present-day look at the past while you help create the local queer future.

We had the pleasure of sitting down to breakfast Saturday morning with the men of John Q—Andy Ditzler, Joey Orr and Wesley Chenault (photo, l-r)—in the kitchen at Kibbee Gallery. While they cooked and served continental breakfast in their pajamas, they got us and other members of the press excited about “Memory Flash.”

You’ll love it too. Here’s why: Four historic queer sites. Four chances to learn about them. Four ways to create your own history on, until now, not-so hallowed grounds.

John Q takes the concept of a progressive dinner and applies it to four places straight out of Atlanta’s little-known LGBT past. Its source material is based on the “Unspoken Past Oral History Project” collected by Chenault for the Atlanta History Center. The 2005 exhibit has thus-far inspired a documentary and a book.

FOURTH WARD WALK
The fun, informative history tour starts at 532 Wabash in the Old Fourth Ward, where Freddie Styles, a member of the 1960s “Jolly 12” group of African-American gay men, will sit on the porch of the place the social group met to tell stories from that time.

On Sundays back then, the “Jolly 12” would socialize and then set out to nightclubs in their own unique take on queer visibility. The men would line up by height and walk through the Old Fourth Ward. The neighborhood knew who they were, and as folks called out from their porches to them as they walked, they would answer back.

“Memory Flash” forward. As the first stop on the tour ends, attendees can join 12 representatives of today’s LGBT Atlanta as they line up and walk symbolically through the neighborhood. A diversity of race and gender is sure to show the changing, more integrated face of the community.

“So it’s an oral history in these historical places, but it’s also about creating new memories,” Chenault says over his coffee cup.

THE JOY LOUNGE
The second stop during “Memory Flash” moves up Ponce de Leon Avenue to the site of the Joy Lounge. Where, you ask? In 2010, think Cactus Car Wash and the recently defunct Phoenix gay bar.

In the late ‘60s, drag queens at the Joy Lounge, including the late Billy Jones (aka Phyllis Killer), broke the law by dressing in full female attire. They would hide in the beer fridge when police came.

The tour stop takes place in the lot east of Ponce Hotel. There will be a show along with a reading of Jones’ words recorded for posterity before his death. Oh, and a beer fridge for hiding will be on site.

ATLANTA TOMBOYS vs. LORELEI LADIES
From there, “Memory Flash” forward—again—to the ballparks at Piedmont Park for an exhibition softball game by the Decatur Women’s Sports Leagues. A women’s league in Atlanta’s past was a key way for lesbians to meet and create social networks, though it was not a gay league per se.

The DWSL teams Atlanta Tomboys and Lorelei Ladies will be in full swing as oral histories from those times are read aloud.

‘LONESOME COWBOYS’
Ease on down the road and through history to Mixx, a new bar in Ansley Square near an almost-erased piece of history. The Andy Warhol film “Lonesome Cowboys” drew the cops in 1969, who stopped the film on obscenity charges and photographed the audience to intimidate “known homosexuals.”

The incident sparked the formation of the Gay Liberation Front of Georgia.

During “Memory Flash,” the film will be screened through the trees and onto the mall where the Ansley Mall Mini-Cinema once stood. And hey, we’re at a bar, so this final stop will also serve as an after-party of sorts.

“Part of the fun, and part of the concept even, is that we aren’t in control of what happens and history is being created,” Orr says. “That’s what it’s all about.”

People are invited to join the progressive event at any point in the night. You can view place and time info for “Memory Flash” on Project Q’s Gay Agenda calendar of events.

John Q also wants you to document the event on your camera, cell phone or video camera. They will collect those, and thoughts right now are to add them to an online queer history. The collective has already-published some interesting material at SouthernSpaces.org.

Project Q Atlanta will be updating the story and interviewing the guys of John Q as the event nears, but we had to tell you what’s up as details emerge.

“Memory Flash” is made possible by Flux Projects, the Emory Center for Creativity & the Arts and the Lloyd E. Russell Foundation. As a companion event, Ditzler’s Film Love, which was a recent participant in the CinErotic Film Festival, will also screen “Lonesome Cowboys” as part of a Warhol series. “Cowboys” screens in its entirety at Emory on March 27, Warhol’s “Horse” screens at eyedrum gallery on March 25, and his “Nude Restaurant” plays at eyedrum on March 26.