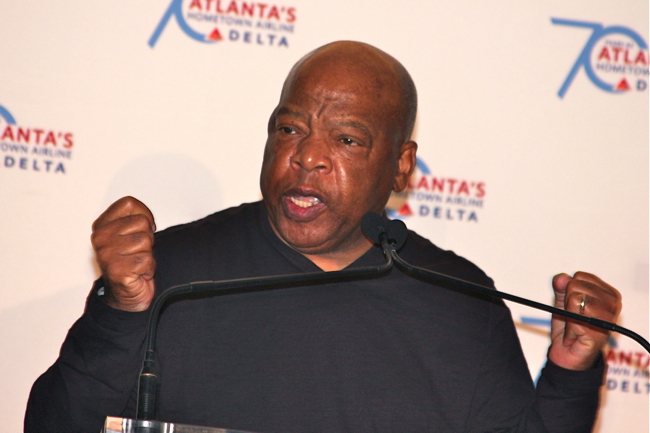 What’s a civil rights icon to do when New Jersey’s governor says that black civil rights should have been achieved by a voter referendum? Show up and turn on the heat. Cue Georgia U.S. Rep. John Lewis. 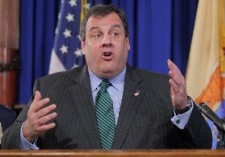 Lewis (top photo), the gay-friendly Congress member known by gay Atlantans as a powerful speaker (watch video) and fit-as-a-fiddle LGBT advocate didn’t hesitate to fly to New Jersey on Monday to fire back at Gov. Chris Christie (bottom photo), who said last week, “The fact of the matter is I think people would have been happy to have a referendum on civil rights rather than fighting and dying in the streets in the South.” Lewis appeared alongside other lawmakers on the state and federal level who say civil rights of any kind should not be up for a vote. True to form, Atlanta’s own was fired up, calling Christie’s comment “a big blunder” and railing in support of LGBT rights. This from Politicker New Jersey:

“Apparently the governor of the state has not read his recent history books. [Christie is] a lawyer, governor and not to know that putting the issue of civil rights – segregation and racial discrimination in the American south – to a vote? We would have never made it during the 40s, the 50s or the 60s. Most of the governors except for a few of the states were outright segregationists. And most of these states in the old confederacy, people of color could not register to vote.” The veteran congressman aligned himself with legislative Democrats who want same-sex couples to have the right to marry in New Jersey. "If two women or two men want to get married, that is a question of human dignity and of human rights," Lewis said. "The day will come when people look back at this and say 'we were just silly.'"

The governor initially made the gay marriage-black civil rights comparison to try and bolster his push for putting gay marriage on New Jersey’s ballot in November – in lieu of a same-sex marriage bill currently before the legislature that Christie vows to veto. The proposed bill is nearing veto-proof support among lawmakers. Before Lewis’ rally on Monday, Christie tried to backpedal first by meeting with representatives of the NAACP who called his comment “racially insensitive,” then at a meeting with reporters to “clarify,” according to the New Jersey Star-Ledger.

Appearing not to get that the “political climate” today for gay marriage might not give it a fair shot with voters either, Christie further riled opponents by calling a gay state Assembly member “numbnuts.” The insult was in response to state lawmaker Reed Gusciora, who said Christie’s stance would have fit right in with infamous segregationists. In what turned out to be another bumbling diatribe, Christie also said that a recently appointed gay state Supreme Court justice promised to recuse himself from any gay marriage cases. And in a too-little-too-late moment, the governor also laid down thick praise for Lewis, saying that he would be happy to meet with the veteran Congress member during his stay in New Jersey. Lewis photo by Project Q Atlanta; Christie photo by New Jersey Star-Ledger