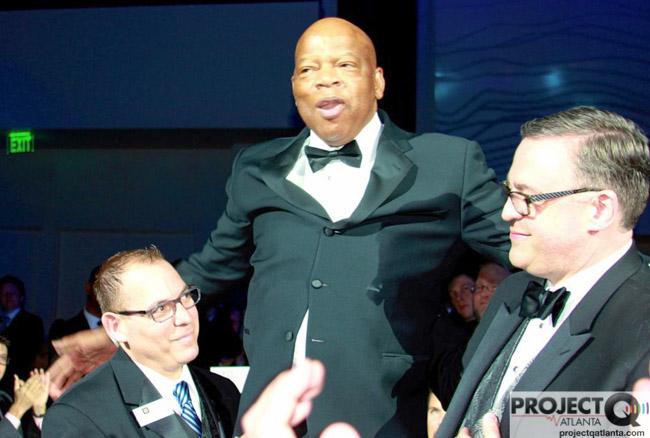 Pride shuffle expert U.S. Rep. John Lewis never stops giving gay Atlanta reasons to love him. Here are two more. So buy him a drink the next time you see him at a gay event. Just don't use Russian vodka.

Lewis, most recently in the news for leading the charge on restricting federal funds for agencies that ban gay adoptions, just makes his advocacy for LGBT equality part of his everyday pitch. Doesn't matter the audience.

Last week, Creative Loafing turned over the keys to Lewis to guest edit the paper. His note to readers includes this:

I believe that we must respect the dignity and worth of every human being. I believe that every single one of us has a contribution to make to our society. And I believe that it must be the mission of every person, regardless of race, religion, gender, or sexual orientation, to leave this little piece of real estate we call Earth a more just and peaceful place.

And now, he's the lone member of Congress from Georgia signing a letter demanding that U.S. Secretary of State John Kerry ensure the safety of gay athletes, fans and media attending the Winter Olympics in Russia next year. The letter is a reaction to a Russian measure signed into law in June that bans public acknowledgement of sexual orientation or showing any support for LGBT rights.

We are particularly troubled because while the newly signed law is the most recent and most extreme codification of Russia’s maltreatment of its LGBT citizens, it is also part of larger trend of anti-LGBT actions in Russia. In the last month, the Russian government also enacted a law banning foreign same-sex couples and single people from nations that have marriage equality from adopting Russian children. Hate crimes and violent attacks against the LGBT community have been reported, including the murders of two gay men earlier this year. In 2012, Moscow instituted a hundred-year ban on LGBT pride parades, a ban that was deemed illegal by the European Court of Human Rights, but which nevertheless resulted in the arrest and detention of seventeen LGBT activists for displaying rainbow flags. Russia’s record of anti-LGBT legislation and persecution pose serious concerns for the safety of LGBT Sochi Olympic participants and spectators.

The Russian law has created a firestorm of controversy and prompted calls for gay bars to dump Russian vodka. In Atlanta, the Eagle and Blake's did just that though at least one bar, Jungle, is resisting the protest calls.