Joan Garner may get thrown in federal prison 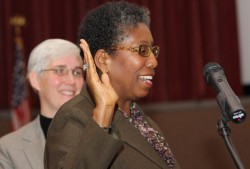 Garner (photo) – along with gay-friendly commission colleagues John Eaves and Rob Pitts, and the entire 7-member board – received a tongue lashing on Thursday from U.S. District Judge Marvin Shoob. The judge has had his fill of excuses from the commission over overcrowding and poor conditions at the Fulton County Jail – you know, the place downtown that recently housed this guy. So Shoob gave commissioners 60 days to buy the city jail or he’ll throw them in the federal penitentiary.

Garner says not so fast, judge. She’s working on it. “I certainly appreciate the need to have additional space. I am working with the chair of the commission to talk with the city to make sure we can do something.”

No doubt a stint in the Big House would crimp Garner’s big gay dinners and Atlanta Cotillion fundraisers. Just don’t arrive in a luxury bus. That didn’t go so well for T.I.