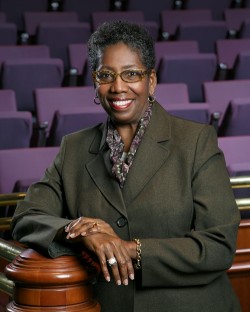 The election long since over, Joan Garner takes office on Wednesday as the only openly gay person on the Fulton County Commission. You know it’s about to happen — her official portrait (photo) has been released and posted to the county website.

Garner, who bested lesbian challenger Keisha Waites in an August primary runoff and didn’t face a Republican opponent in November, is scheduled to take her oath of office on Wednesday morning with other commissioners. Then the fun begins – the hours-long monthly meeting of the panel as it tackles an ever-tightening budget. Garner is replacing District 6 Commissioner Nancy Boxill, who didn’t seek re-election.

“The board meeting is first on my agenda,” Garner said Tuesday. “We have some really big issues to deal with – the budget being one. I’m preparing myself to make those big decisions.”

Garner will receive her oath from Cynthia Wright, who is chief judge of Fulton County Superior Court. Wright, a lesbian, was publicly outed in 2003 when her then-partner shot her twice in the driveway of their Morningside home.

“She is the new chief judge and I’m a new commissioner. For me, it is about building new relationships in the county. She was a no brainer in terms of the choice [to administer the oath]. I’ve known Judge Wright for a number of years and respect who she is and her work,” Garner said.

Garner takes office during a swearing-in ceremony set for 9 a.m. on Wednesday at the Fulton County Government Center on Pryor Street.