Joan Garner remembered for loving, fighting for ‘all the people’ 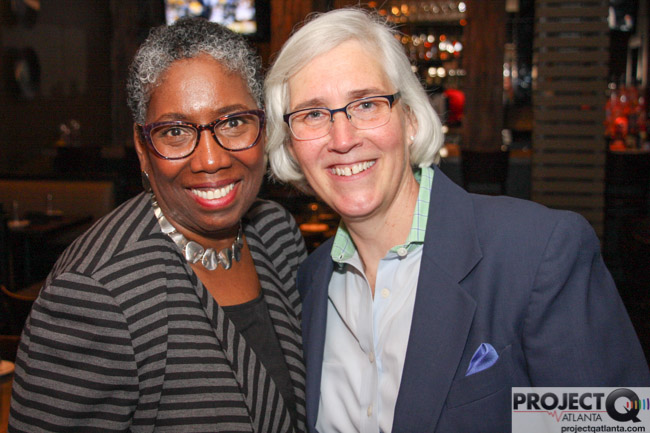 Friends, family, supporters and scores of elected officials commemorated Joan Garner on Saturday during a touching memorial service for the Fulton County commissioner, community organizer and LGBT activist who lost her battle with cancer.

“Joan Garner did her work while she was here,” Rev. Duncan Teague said during the service at Ebenezer Baptist Church. “She heeded many calls to come and help or just to come by and see how this idea sounds or that idea sounds. And she let you know if it wasn’t right because she could both inspire and aspire for our common good.”

“We are challenged by the example set by Joan because she went ahead and did good, sometimes difficult work whether we were ready for her or not,” he added.

Teague, a longtime LGBTQ activist and friend of Garner for nearly 30 years, said Garner inspired others to follow her footsteps in advocating for social justice, LGBTQ equality and battling against HIV.

And Teague, who became a Unitarian minister after years of LGBT equality work, offered a touch of humor when he said that it was Garner who made it possible for him to finally stand at the pulpit of Ebenezer, the storied church where Martin Luther King Jr. and his father were both pastors.

“I had dreams when I didn’t even want to be a minister about being here and Joan Garner got me here,” Teague said to laughter and applause. “Only Joan.”

“She answered the requests to do civic work, foundational work, cultural work, social change work. And whether we knew we had the funding or not, because then she would teach you how to fundraise. So we don’t have any excuses, y’all. Joan just kept going. She came out from behind what would have been an obstacle and just kept doing her work. She kept doing her duty and all the while still being Joan Garner from D.C.,” Teague said later.

Harry Harkins, who worked with Garner and other LGBTQ activists for many years, praised her advocacy work as the first-ever gay liaison in Atlanta under Mayor Maynard Jackson, her efforts with the Georgia Task Force on AIDS in the early days of the epidemic and later helping to launch the Fulton County Task Force on HIV/AIDS, and her lobbying to secure domestic partner benefits in Atlanta years before gay marriage was legalized.

“People talk a lot today about intersectionality, the theory that various forms of oppression intersect. But long before that was a common phrase or buzzword, Joan was living it. Joan understood,” Harkins said.

“She got it that racism, sexism, homophobia, transphobia, ableism, ageism, xenophobia are all related and all must be combatted to achieve the just society that she worked for her entire life,” he added.

But Garner’s work didn’t stop with creating groups and pushing for change. She worked to deliver funding for those groups too, Harkins said.

“In addition to doing the work, walking the walk, Joan understood that the work of social change needs to be funded. While she was a really great personal fundraiser, you really couldn’t say no to Joan Garner. My checkbook went screaming every time she called,” Harkins said.

“How far we have come. What a wonderful crown to Joan’s life-long work for LGBTQ equality was, that partly as a result of her efforts, she was able to legally marry the love of her life. We have a long way to go, but Joan’s marriage to Jane [Morrison] is a testament to how far we’ve come,” Harkins said.

Morrison (photo right with Garner), a Fulton state court judge, and Garner lived in Atlanta’s Historic Fourth Ward neighborhood. When the U.S. Supreme Court legalized gay marriage in 2015, Morrison married the first same-sex couples in Fulton. Morrison and Garner then joined hands to celebrate the decision during a rally at the Center for Civil & Human Rights in downtown Atlanta, an event Garner rushed to after a treatment for her cancer.

“If we are blessed with the chance to look back on our time here, we can know that we spent it well and that we made a difference. That is how Joan Garner lived. That is her legacy,” Harkins added.

Linda Bryant, who founded Charis Books & More, one of the nation’s oldest operating feminist bookstores, said she and Garner were “fellow travelers along the path of the spiritual journey.”

“Wherever we were on those paths, whatever political issue we were facing or personal issue we might be facing, or whatever was going on, our job in each other’s lives was to call one another back to the spirit, back to listening, back to being true to where we were being led,” Bryant said.

“This afternoon I hear her voice and feel the touch of her hand. I know you all can see her smile in this place and I feel like she is inviting all of us to open our hearts to the love that is here in this sanctuary,” Bryant added.

“If it is true that service is the rent we pay for the space we occupy, we can surely say that Joan P. Garner paid the price and today she seizes the prize. We give God praise for her life, for her faith and for her service,” Warnock said.

Garner died April 18 after a nearly two-year battle with cancer. She was 65.

In early, the commission honored Garner a second time by naming a conference room at the county’s new health building after her and establishing a scholarship program for students interested in county government and health and human services.