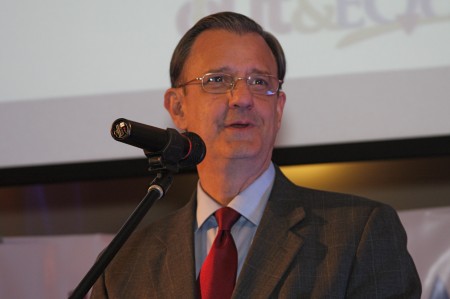 Jim Martin’s got his gay creds in order.

He supports gay issues other than same-sex marriage, has the backing of the Human Rights Campaign and the National Stonewall Democrats, amassed an army of gay campaign volunteers, appears proudly at gay events and supported gay issues as a state lawmaker. (His opponent, Saxby Chambliss, received a failing score recently from HRC.)

But if you need more reasons to cast a vote today in favor of Martin, who is trying to prevent Chambliss from winning a second term as a U.S. Senator from Georgia, consider this: Patricia Mock.

The small business owner from Conyers drove two hours to Perry on Monday to take part in a Chambliss rally.

But she added, “Saxby Chambliss can stop him.”

It’s that sort of sentiment that’s feeding the race now. Both political parties have brought in their A-list celebs, including Alaska Gov. Sarah Palin. She joined Chambliss in rallies across Georiga on Monday in her first campaigning since she and Sen. John McCain lost their White House bid on Nov. 4.

Ms. Palin’s continued popularity in conservative states like this one made her a logical choice to be the closer in the campaign, intended to generate enthusiasm and a high Republican turnout on Tuesday.

“Losing an election doesn’t mean we have lost our way,” Ms. Palin said at a Chambliss rally here, before an exuberant crowd of 2,500. “If we are to lead again, we have lots of hard work ahead of us. Let it begin here tomorrow in Georgia.”

Need another reason to vote for Martin today? Consider this: Both parties have spent more than $17 million in the four-week runoff campaign, an amount about equal to that spent in the campaign leading up to Nov. 4. Much of the $17 million has come from interest groups outside of the state, with Chambliss supporters outspending Martin’s forces.

Since Republicans took a beating at the polls nationwide Nov. 4, business groups and conservative organizations have spent $4.2 million here on Sen. Chambliss, nearly four times as much as labor unions and liberal advocacy groups have spent on Mr. Martin since Election Day.

At stake is a filibuster-proof margin in the Senate. When a political party controls the White House, House of Representatives and 60 votes in the 100-member Senate, its leaders can sidestep most parliamentary procedures designed to block legislation, such as the filibuster.

So far today, turnout is light.