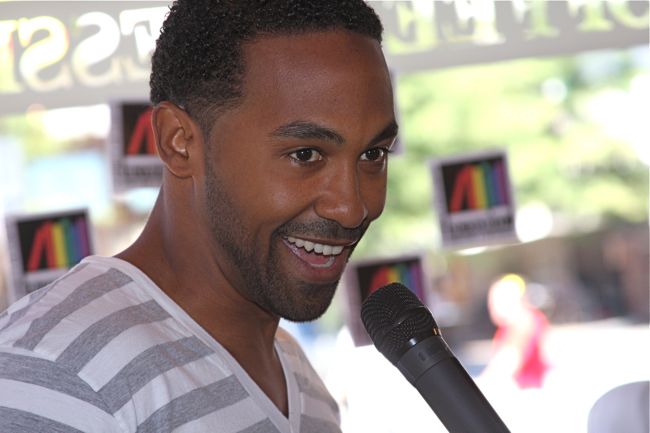 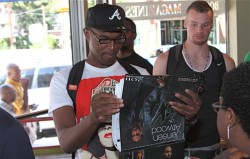 Actor Jensen Atwood spent time with fans and signed copies of his sizzling new calendar during an appearance Sunday at Outwrite Bookstore, one of a series of events the “Noah’s Arc” favorite joined during Atlanta’s Black Pride celebration.

The 34-year-old actor (top, bottom photos), best known for his role as Wade on the popular “Noah’s Arc” on Logo, answered several questions about his role in the show and his support for gay equality during his stop at the Midtown bookstore. Then he dove into signing copies of “Jensen Atwood on Black,” his new 16-month calendar for 2011. Atwood was also scheduled to appear during at least two other events during the holiday weekend.

Atwood, who has landed a few television commercials since his 2008 role in the movie “Noah’s Arc: Jumping the Broom,” says there is talk of a spin-off of the groundbreaking TV show. 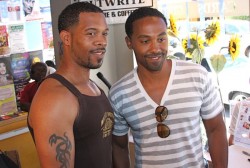 “They are working on a spin-off, and it is because of fan support that it is staying alive so long,” Atwood said. “We started the project eight years ago and did a feature film two years ago, and there are still new fans every day and new excitement. You guys want more, and we are trying to give you more.”

Atwood, who played a gay role in “Noah’s Arc,” was asked about his sexual orientation and support of LGBT issues.

“I don’t use public forums to speak about my own sexuality. But as far as human rights, I mean I think it is a no-brainer for me, at least, to speak out about equal rights for anyone and everybody. … I want the same rights I’m sure everyone else wants. That’s what I’m for — equality. I think that’s pretty simple,” Atwood said.