Jennifer Barnes Balenciaga, from ballrooms to the halls of power 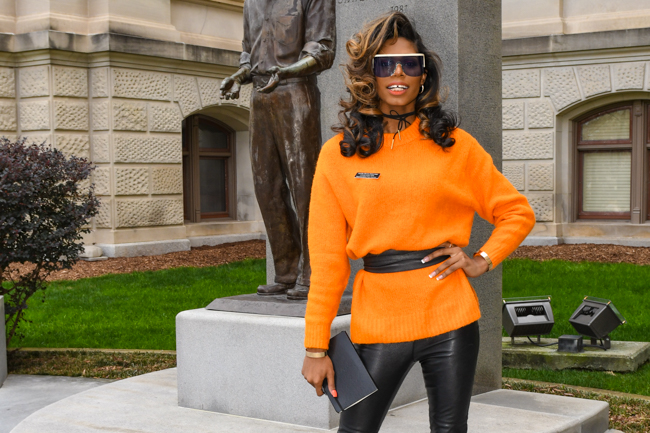 The name Jennifer Barnes Balenciaga stands out for several reasons — one being that last name. Yes, the downtown Atlanta resident is a member of the House of Balenciaga, a major force in the black queer ballroom scene.

But she’s also an Atlanta HIV activist and the LGBTQ liaison for queer state Rep. Park Cannon at the State Capitol.

Balenciaga fills us in on life under the Gold Dome as a trans woman of color, misconceptions about ball culture and her secret talent.

What was it like for you growing up in Hamilton, Ohio?

Well, it is a small town filled with a lot of necessity to honor religion instead of the acceptance of people being themselves. Luckily, I was able to have quite a few close girlfriends that allowed me the space to be exactly who I was born to be. We’re still friends to this day.

What’s a typical day like as a legislative staffer?

Being the LGBTQ liaison for state Rep. Park Cannon has brought about so many experiences and opportunities that black people of trans experience rarely get the chance to experience, i.e. The Commerce Club, Alpha Kappa Alpha Luncheon and Black Democratic Party Dinners, to name a few. I also appreciate the actual use of my suggestions and input on important subjects such as housing, LGBTQ issues, health disparities and others.

What’s something that would surprise people about what goes on day-to-day under the Gold Dome?

Most opposers of liberal issues — conservatives — are oblivious to how it affects those liberal people and individuals. So in turn, actually having patience and the use of some facts and real life experience usually makes a huge impact on them.

The FX showPoseshined a giant spotlight on ball culture. What’s the biggest misconception about that and the house system?

The biggest misconception in my opinion is that ballroom is for everybody … It is not for everybody! I honestly have witnessed the ballroom individuals that everyone has grown to love and idolize were built under so much pressure from some of the most opinionated and influential people in this underground culture.

Houses and chosen families are two different entities. They sometimes may intersect, but that is not guaranteed. Please respect the culture of ballroom and not just the surface glitz. But the House of Balenciaga is my home.

What’s something that few people know about you?

That I vogue extremely well. My mother McDebra (Selvin) made sure of that.

This profile originally appeared in Q magazine. Read the full issue below.

Pick up a new edition of Q each week at queer and LGBTQ-friendly venues around town, and meet fascinating queer Atlantans in every edition of our Q&A profiles.

Two LGBTQ activists joined a state senator and others in a federal lawsuit over their arrests during a protest at the Georgia State Capitol. The...
Read more
Community

As some incessant chatter goes, monied yuppies in reversed suburban flight ruined Midtown, and LGBTQ Atlanta is worse for it. We fixed up the place, and...
Read more