Jenna Laurenzo and Out on Film drop ‘Lez Bomb’ on Atlanta 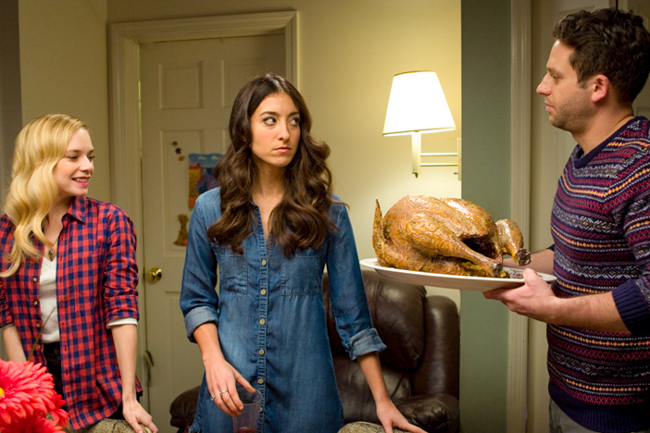 All she wants to do for Thanksgiving is bring her girlfriend home and come out to her parents and family, but matters get sidetracked for the main character in the comedic “Lez Bomb.”

With a heavyweight cast including Cloris Leachman, Bruce Dern, Kevin Pollak and Steve Guttenberg, Jenna Laurenzo’s debut feature – which she wrote, directed and stars in – returns to the ATL this weekend after an award-winning Out On Film engagement.

Project Q caught up with Laurenzo (film still, center) recently to talk about the long journey to making the film and how her own family inspired the dysfunctional one seen in the movie.

So how did “Lez Bomb” come up?

I started writing the script for this eight years ago. The first draft was far more dramatic and angst-y.  I was able to look at it later through a comedic lens. I spent six years trying to attach certain people to it and then realized I’d have to do it myself.

I made “Girl Night Stand” (a nine-minute comedy short about a young woman who questions her sexuality after a one night stand) and when I put it online, it really helped shape the conversation to investors and demonstrated that there was an audience for this kind of content. (The short has more than three million views on YouTube.)

Did you ever dream of getting this amazing cast?

No! Absolutely not. We had started talking to a few actors. We got the script in the hands of Kevin Pollak, and he loved the message of the script and loved that it was being delivered through comedy. That helped attracted other names. Bobby Farrelly (“There’s Something About Mary”) read the script and liked it.

It came together in an amazing way. It surpassed all my expectations. In a lot of ways, there were a lot of miracles for this to come together. I had not imagined it was possible. So many people said this is how it’s going to happen, and when I realized there was no particular path, it was so unexpected.

When we sold it to a distributor who wanted to bring it to a wider audience. It felt like icing on the cake.

How much of 'Lez Bomb is autobiographical?

The characters are largely based on my family. My mom and dad are right off the page. The emotions of coming out were deeply personal for me. I wanted to cram all the anxiety of that roller coaster into 48 hours with Thanksgiving as a backdrop.

There is this expectation that the family is going to have a problem, but really the acceptance my character is fighting for is her own. She doesn’t want to disappoint and doesn’t trust that the love for her would extend that far.

The reception has been so positive at festivals including Atlanta's Out on Film. Why do you think this is so universal?

One of the reasons it is important to have Thanksgiving as the backdrop for the story against is the relatability. We are putting a queer twist on the holiday film. I wanted to lean into those tropes we had seen in those films and do something we thought we had seen but hadn’t. Have a twist.

Because it is in in this family context, and there is all this dysfunction and the holidays, there is relatability to it. It can hopefully expand to a broader audience while also giving the queer audience something they should have at this point.

How are your own holidays?

Well Grandma doesn’t throw a turkey! My family is very boisterous and we did find my uncle smoking weed in the basement . My brother would never hit on my girlfriend — not that I know about! But there is that sense of everyone talking over each other, with their own narrative. There is a lot of love, but everyone has their own crap that they bring to the table.

Just in time for Thanksgiving, “Lez Bomb” screens Saturday, Nov. 17 at 5 p.m. at the Plaza Theatre with actress, writer and director Jenna Laurenzo in attendance.  out on Film hosts, and the movie runs throughout the next week.