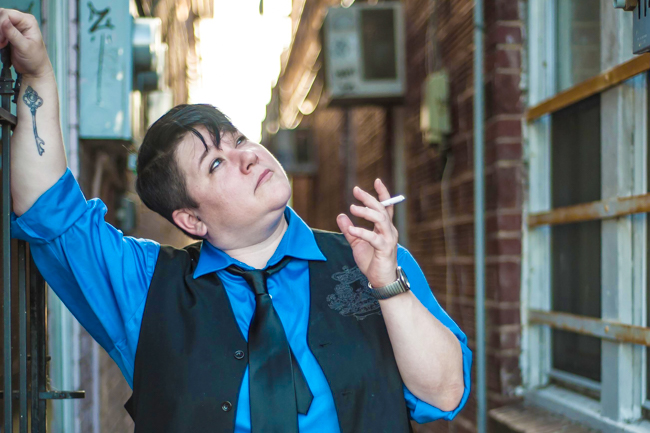 Get ready, Atlanta. Jenn Snyder is a powerhouse comedian tearing up stages all over the country with her bold style and great story, and she’s coming to Atlanta this week for a one-nighter.

Hailing from Columbia, S.C., Snyder's. stand up has made her stand out nationally. She’s destined to be a household name, with a national tour and an album already under her belt.

Hot Mic Comedy brings the rising star to Relapse Theatre on Feb. 23, and she sat down with Q to talk queer discrimination, success amid straight privilege, weed as self-care, and being a fireball badass on top of all of it.

What are your favorite things to do in Atlanta?

Eat! Also play Star Bar and talk shit with all my comic friends!

How did you get started in standup?

A talent show in middle school. I wanted to sing, but my mom said she thought I was funnier than I could sing. So I made a routine and won. I got to do three assemblies the next day instead of classes. I was hooked.

How does being queer inform or shape your comedy?

I talk about it a lot in my set, but it still shapes my everyday life. I still get stared at every day. I still get gay heckles. So until that stops happening, I’m going to talk about and make jokes about being gay.

What can audiences expect from your show?

High energy! I’m kind of a fireball! I have to work the whole stage with enthusiasm. It’s just what I do.

In a mostly straight, mostly cis male field, you are known as one of the best in the Southeast.  How does that feel to have the respect of those peers and to represent queers in this capacity?

I’m honored and humbled by it. Some of the greatest comic minds in the business treat me as a peer and friend. It warms my heart.

I feel like every straight friend a gay person makes is one more person on our side. When you work hard and get noticed, it means one more queer performer on a show. That’s always important.

More queer people than ever are doing stand up. Why do you think that is?

I think it partly great gay comics like Ellen paving the way, but then I think there’s also been a shift in comedy. People are tired of the same old thing.

Queer voices are a fresh perspective a lot of people haven’t heard. I think that kind of space is creating a siren song, drawing in more comedic queer voices. It’s an amazing time to be a queer comic.

What makes you laugh?

Steve Martin is a god in my world. I think he’s cheesy and charming at the same time. His movies shaped my comedic personality for sure. I saw the lead character on Roxanneand decided that’s who I wanted to be. A romantic hilarious smart ass.

Mike Myers is another favorite of mine. Katt Williams too. I think his energy is amazing. I’m watching LetterKennyright now, and I think it’s the most hilarious show on television. I also love Schitt’s Creektoo.

As far regional comics, my hero and role model is Stewart Huff. I think he’s a genius. As far as up and comers to watch, Katie Hughes is a monster! She made my side hurt from laughing.

OK, lightning round. Favorite way to spend a day off?

Get high and go to a horror movie, then eat something delicious, and then go to a show!

If your comedy was a strain of marijuana, what strain would it be?

Sativa! An airy tingly high that you never want to end.

Bacon, because it is of the gods!

ALL the baby things! Especially baby goats though! It seems to be a really good gig being a baby goat! They’re so happy!

Ask yourself a question and answer it.

Who would you like to thank for their support of your comedy? All my friends and family for sure, but especially my mom and dad! They just believe in me so much. In their minds, I’m already a successful comedian.

Three words for your comedy.

What role would you want if you could play any race age or gender?

What would be the title of your autobiography?

Blunt & a Cupcake: Learning to Love Myself

A version of this interview originally appeared in Q magazine. Read the full issue below.