By day, Jeff Graham is the longtime LGBT activist who combats gay haters at the Gold Dome, honors soldiers in the cause, calls out the Atlanta Braves and hugs the First Lady. By night, at least last Saturday night, he’s Lola Lorraine covering an ABBA hit to raise funds. 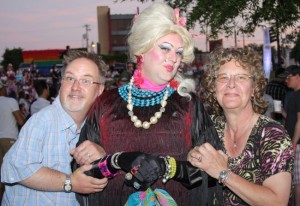 Even in drag, Graham – executive director of Georgia Equality — is working for the cause. On Saturday, he dusted off his long-retired drag persona Lola Lorraine to perform (video above) during the East Point Possums 15th Annual Show (view photos). He worked a look and the donation bucket to Abba’s “Money Money Money” to help raise funds for the Rush Center.

The entire three-hour draglicious spectacular benefited the LGBT center on DeKalb Avenue, which houses Georgia Equality, the Health Initiative and Atlanta Pride while also playing to host to scores of meetings for other LGBT non-profits.