Jeff Graham, Georgia Equality’s executive director and a longtime HIV and LGBT activist, is never far from a compelling sound bite. He can break a complex legislative issue into digestible parts with ease. 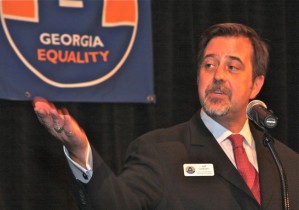 He did it again on Feb. 21 when he delivered a 70-second pitch in support of House Bill 630, which would ban discrimination based on sexual orientation and gender identity for state employees. His testimony came during a state House Judiciary subcommittee hearing on the legislation.

The committee didn’t follow Graham’s lead, instead voting to table the measure 3-2. But Graham’s fact-filled pitch stood in sharp contrast to one offered by Tanya Ditty, the only person who testified against the legislation and the woman quickly becoming Georgia’s new Hater-in-Chief.

UPDATE: Good thing for concerned citizens that these videos exist. Little did anyone know recordings from the Feb. 21 testimony would lead to big drama, a ban on photography and recording, and yet another stall of the bill at a second hearing on Feb. 27.