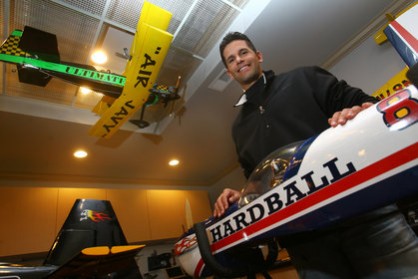 My man-crush on Javy Lopez didn’t end when his run with the Atlanta Braves did last year. Fortunately, I was on hand to see his last performances as a Brave during his attempted return in Spring Training last year.

Nevertheless, Lopez didn’t lose the love for Atlanta and remains in the suburbs in a 8,500-square-foot home. The Atlanta-Journal Constitution caught up with Lopez recently for a photo spread in the paper’s Private Quarters feature.

Two things are clear from the photos: Lopez, at 38, remains as hunky as ever and his house shows that he managed to bank some of his millions, unlike many pro players who are dropped from their sport and soon find themselves without a penny to their name.

“What sold us on this house was the lot. It’s a flat lot and we could build the pool,” said Gina Lopez, 34. The six-bedroom home was built on a little more than an acre. The Lopezes are selling the home, which is listed for $3.5 million, to consolidate their real estate holdings. They own another home in the Atlanta area and two condos in Florida. They plan to buy another home in the same River Club neighborhood.

The family spends most of their time in the kitchen and on the terrace level. The terrace includes a theater, pool table, wet bar, 700-bottle climate-controlled wine cellar, video games and a ping-pong table.

He has a special room for his planes that allows him to build, repair and dote. And it comes with a lake view, an important factor for Lopez. He has been building airplanes since he was 17.

The terrace is also where Javy Lopez added a built-in display case for his baseball memorabilia and awards, including his 2003 Silver Slugger Award and 1995 World Series photographs. Lopez was a key member on the Braves’ 13 consecutive division title winning teams, a three-time All-Star and a fan favorite. The retired star, now 38, is working on his own line of baseball bats.