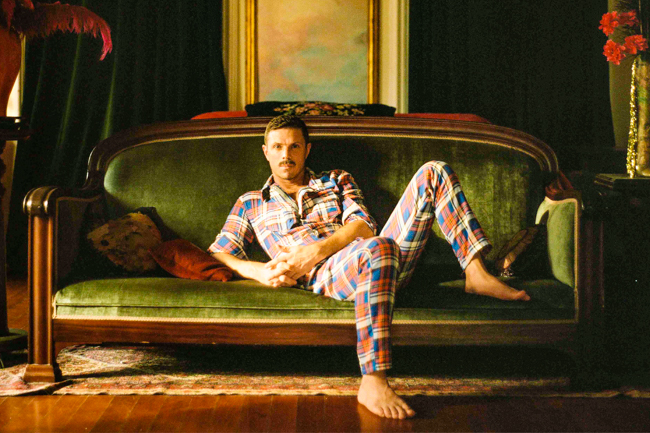 Imagine if honky-tonk, funk and electronica had a three-way and made a baby. That baby would be “Jake Shears,” the eponymous debut solo album by Scissor Sisters’ out queer frontman.

“I think the best description is it’s a queer Southern rock record,” Shears says. “It has a strong Southern feel, and it was all made in Kentucky and Louisiana. The musicians are also all Southern, for the most part.

Q sat down with the singer and queer sex symbol for an Atlanta exclusive to talk more about the album, the surprising straight-guy appeal of his new mustache, and how many times he plans to hit Atlanta behind this particular record.

“Big Bushy Mustache” is an epic, sexy, celebratory song. Tell us more about it.

It’s one of my favorite songs on the record. There never really had been a mustache anthem, so I just saw the need for it in the world. [Laughs.]

“When I had the idea, I had to figure out the perspective and story. Once I grew a mustache, I got approached by a lot of straight guys, so that was my way to tell the story. It’s also one of the heaviest songs on the album, rock-wise.

How is the album different than recordings you’ve done in the past?

Every track is about eight or nine people playing together at the same time. The horns and strings were recorded in New Orleans and added in later, but everything else was recorded in one take.

[Recording in one take] was so scary at first, because what you recorded is what goes on the tape. I love how it sounds and how it feels. There are imperfections on it, and there are fingerprints on it. It feels dangerous recording that way, and it was exciting. It’s the kind of record that doesn’t get made these days.

This album had a long gestation period, yes?

I moved to New Orleans almost three years ago and started writing then. It took a solid two years to write, record and mix the record. But the album has been mixed and finished for a year.

In August 2017, I got the call to do “Kinky Boots” in New York City at the beginning of 2018, and that moved things to this summer.

I’ve been working on this record for a long time and put my everything into it. I am immensely proud of it, and I can’t wait for people to hear it.

I’ve waited a long time for this moment, and it’s been a long journey to get it out.

You’re hitting the road in the UK behind the album. Will you tour the US as well?

I am definitely touring the US, and lots of fun announcements are coming up, so stay tuned! I want to tour a lot with this and play as many shows as possible.

I want to work this record a lot. I hope to come through Atlanta a couple of times, at least.

Your memoir was very well-received. Can we expect a sequel?

Yes, totally. I need to get some more separation from things. I stopped the first one in 2006, but I think I’ll definitely keep writing. I’d love to write a novel, and I plan on it. It might take a while but I’m going to keep at it.

If you could go back in time and give your younger self advice, what would you say?

I stayed out of trouble, I guess, but got in tons of trouble at the same time.  [Laughs.]

I look back, and there’s nothing I’d really change other than – it’s funny, I think of the body issues I had in my early 20s, how gay culture and gym culture affected me, and how I viewed myself. I can’t imagine what someone who is 21 now is going through in that respect. I feel lucky that I grew up when I did.

A version of this interview originally appeared in Q magazine. Red the full issue below, and pick up your copy around town.