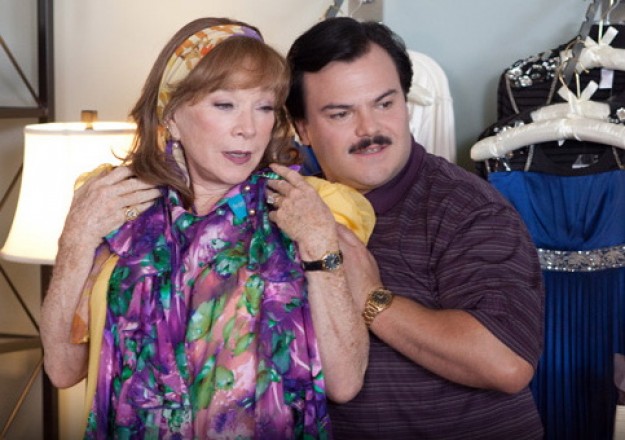 Even if it seems outrageous, “Bernie” is based on real-life. Director Richard Linklater takes us to a small Texas town in 1996. Bernie Tiede (Black) is a local mortician who is literally loved by all in his small town of Carthage, Texas. He has no lady companion, loves theater and the arts, loves to cook, and is immaculate and detailed in his work. Hmmm.

Through persistence, he becomes friends with Marjorie Nugent (Shirley MacLaine), the richest woman in the area and certainly the meanest. Even her remaining family members don’t like her. Marjorie and Bernie become companions – traveling constantly – and he eventually comes to works for her. Yet at some point, he becomes more her property, with Marjorie placing demands on his time and jealous when he isn’t around.

And one moment during a Marjorie outburst, he shoots her. Nine months pass without anyone seeing her and eventually District Attorney Danny Buck (Matthew McConaughey) smells a rat – or a corpse.

As they proved in “School of Rock,” Black and Linklater work extremely well together. The director knows how to rein Black in but take advantage of his adventuresome comic nature as well. This is certainly Black’s best performance to date. He doesn’t make Bernie a caricature at all, but a complex creature, eager to please, almost a manchild. What’s underneath his enthusiastic façade is left to interpretation.

Maclaine spends most of her time scowling, but she does create a character, someone who finds a friend in her life and maximizes their time together. Luckily she doesn’t jump into “Steel Magnolias” territory. McConaughey plays it completely straight and gets a lot of laughs as he pursues Bernie and tries to find out what makes him tick.

Director Linklater uses the townspeople – a combination of real actors and actual citizens – to shed light on the case and they are consistently funny. Even when they border on the broad, Linklater manages to make them real.

The subject of whether Bernie is gay comes up. The townspeople have their own various conclusions, and Buck claims to know several married men Buck has slept with. According to the Amarillo Globe News , police found videotape inside Bernie’s house of him having sex with married men.

Linklater’s film is perfectly poised – it’s never too outlandish and never too dark. He succeeds in making Bernie one of the most likable screen characters in some time. Even when the townspeople find out the truth, they unanimously leap to his defense.

With its dark themes and closeted main character, this probably isn’t going to be a box office sensation. It’s a small film, though, that shouldn’t slip through the cracks.

“Bernie” opens Friday in Atlanta at the UA Tara.

Jim Farmer is an Atlanta-based freelance writer and public relations professional specializing in film promotions. He has been a theater and pop-culture critic for more than a dozen years and is the director of Atlanta’s annual Out On Film LGBT film festival.